This article is about the house in the Sydney suburb of Paddington. For the house in North Downs, Surrey, see Juniper Hall 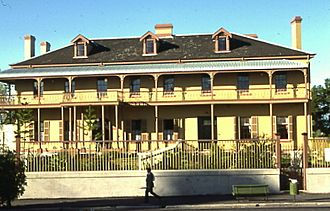 Juniper Hall is a historic two-storey Georgian house in the Sydney suburb of Paddington. It is listed on the Australian Register of the National Estate.

Juniper Hall was originally the home of Robert Cooper, a gin distiller. He reportedly designed the house himself and had it built circa 1825, including a cellar and attic in the structure. Unlike most Georgian homes, it features an upstairs balcony, which looks out onto Oxford Street. As time went by, Juniper Hall became hidden behind a row of commercial buildings on Oxford Street. A restoration project was undertaken by the National Trust in which the commercial buildings were demolished so Juniper Hall could be seen clearly, and it was fully restored by Clive Lucas Stapleton and Partners in 1988.

Robert Cooper (1776-1857) was a wealthy London publican when transported to NSW in 1813. He was granted a conditional pardon in 1818, having joined in partnership with James Underwood, and Francis Ewen Forbes, two fellow emancipists, to start a distillery. With his third wife Sarah May he built a house big enough for his 14 children on a large block elevated 61m above Sydney Harbour and Botany Bay. Cooper is said to have promised Sarah 'the finest house in all the colony'. Cooper was himself a part-time builder and capable of producing the comparatively simple design and erecting it with the help of specialist tradesmen. He built a two storey house with a basement and four large rooms on each floor. The basement contained the kitchen. A coach house, stables and servants' quarters were built at the rear. The position on the ridge meant the house had views across Sydney Harbour to the north and to Botany Bay to the south. He named his new home Juniper Hall after the juniper berry used in gin's distillation, also recalling Juniper Street, the location of his former distillery in London.

Cooper returned to England in 1831 with his family and let the house to John Kinchela, an Irish lawyer taking up the post of Attorney-General in the colony. Kinchela renamed the house 'Ormonde Hall' in honour of his patron the Marquis of Ormonde, but only stayed until 1838, when the Cooper family returned.

In 1849, having over-speculated during the decade, Cooper was declared bankrupt and forced to leave his house, mortgaging it for £1,900. After the Coopers left the house was renamed 'Ormond House'. In May 1852 house and land was leased to the recently formed Society for the Relief of Destitute Children. Up to 130 children were housed until 1858 when the Society moved to buildings designed for the Society by Edmund Blacket at Randwick.

After Robert Cooper died in 1857 Sarah Cooper moved back into the house. Before she died in 1863 she refurbished the house, possibly with a view to selling. Her trustees leased the house to a variety of charitable and educational organisations, including the NSW Institution for the Deaf and Dumb (1868-72), a ladies' college (1873-9) and the Children's Relief Board (1884-5). In 1885 the Government purchased the property for £5,800 for use as the probation office for the Metropolitan Shelter for Children and the Children's Court, a role it maintained until 1921.

In 1921 Joe Gardiner, a shoe manufacturer, purchased the property for demolition and redevelopment as flats and shops. The public outcry changed his mind and he turned the house into flats and built a row of six shops in the front garden facing Oxford Street. Following Gardiner's bankruptcy the property was acquired by a Melbourne firm, Avrom Investments.

At the end of World War II, a local manager for Avrom, Elizabeth Randall returned the name of the house to Juniper Hall. Randall also defended the house against demolition by increasing the rents of the tenants, making the property a paying proposition.

The Paddington Society campaigned for the conservation of Juniper Hall and in 1981 an Interim Conservation Order was placed over the property, with a detailed report on the history of the house and garden being prepared by James Kerr. A development proposal, prepared by Wills Denoon, was considered by a new owner, Opera House Investments Pty Ltd. In 1982 new joint owners Manawar Pty Ltd and Golenat Pty Ltd. proposed to convert the building to strata title.

In 1983 a Permanent Conservation Order was placed over the property and in 1984 the State Government gave $750,000 on a dollar for dollar basis to the National Trust towards the purchase and restoration of Juniper Hall. Following Kerr's recommendations the property was conserved under the direction of Clive Lucas Stapleton & Partners architects. The works, completed in the Bicentennary Year 1988, included demolition of the row of shops facing Oxford Street, incorporation of reception rooms, offices, gallery space, an Australian Children's Museum, a National Trust (NSW) Gift Shop and public refreshment rooms. As well Juniper Hall's front garden was reinstated, with the aim to return to the appearance in c.1900.

The property was put on the real estate market in 2012 and sold for $4.551m to the Moran family. The family are currently using the house for the annual Moran Prizes exhibition, sponsored and administered by the Moran Arts Foundation Ltd. A rotating calendar of exhibitions by portrait and photographic artists are being held on the ground floor, with access by the general public available on most days of the year. The first floor and attics are to be converted into a private residence for family members. The Moran family have a long history of restoring historic properties, and are direct descendants of Robert and Sarah Cooper.

All content from Kiddle encyclopedia articles (including the article images and facts) can be freely used under Attribution-ShareAlike license, unless stated otherwise. Cite this article:
Juniper Hall, Paddington Facts for Kids. Kiddle Encyclopedia.