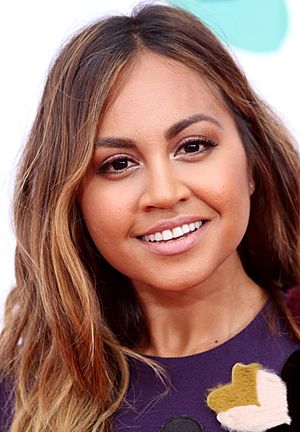 Jessica Hilda Mauboy (born 4 August 1989) is an Australian R&B singer-songwriter and actress. In 2006, she was runner-up on the fourth season of Australian Idol. After this, she signed for Sony Music Entertainment. She has released three studio albums, one live album, three soundtrack albums, one extended play and 35 singles. She was a guest performer at the Eurovision Song Contest in 2014. She competed for Australia at the Eurovision Song Contest in 2018. She has also appeared in the movies Bran Nue Dae (2010) and The Sapphires (2012). She has also starred in the drama television series The Secret Daughter since 2016.

Mauboy was born in Darwin, Northern Territory. Her mother is an Indigenous Australian and her father is from West Timor.

All content from Kiddle encyclopedia articles (including the article images and facts) can be freely used under Attribution-ShareAlike license, unless stated otherwise. Cite this article:
Jessica Mauboy Facts for Kids. Kiddle Encyclopedia.