The Queen Victoria Market (also known colloquially as Vic Market or Queen Vic) is a major landmark in the central business district (CBD) of Melbourne, Victoria, Australia. Covering over seven hectares (17 acres), it is the largest open air market in the Southern Hemisphere.

Constructed in stages from the 1860s and officially opened in 1878, the Queen Victoria Market is the last remaining major market in the CBD, and along with Prahran Market and South Melbourne Market, the last of the city's Victorian era markets still operating. It is listed on both the Victorian Heritage Register and the National Heritage List, and is one of Melbourne's major tourist sites, attracting approximately 10 million visitors annually.

The Western Market was Melbourne's first official fruit and vegetable market, established in 1841, six years after the city's founding. It grew to take up an entire block bounded by Market, Collins and William streets in the central business district. The expansion of Melbourne to the east led to the establishment of the Eastern Market in the late 1840s, which quickly overtook the Western Market in popularity.

The site of Queen Victoria Market was once part of the Old Melbourne Cemetery, which closed in 1854. Most of Melbourne's early settlers are buried there, including city founder and explorer John Batman. Occasional burials continued until 1917, and in 1920 it was estimated that a total of 10,000 graves existed on the site, though the exact number is unknown since the cemetery records were lost in a fire in 1864. 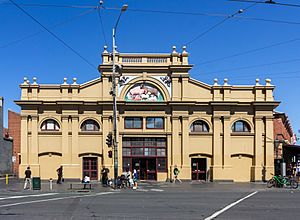 The façade of the Meat and Fish Hall building

After the cemetery's closure, a number of small wholesale and retail markets were established around the site in the late 1850s to serve Melbourne's rapidly growing population. The Lower Market (Deli Hall, Meat and Fish Hall, and H and I sheds) was originally set aside in 1857 for a fruit and vegetable market due to over-crowding at the Eastern Market. However, the location was contested due to its proximity to the cemetery, and proved unpopular with market gardeners who refused to use the space. This resulted in it serving as a livestock and hay market (the Meat Market Reserve) until 1867, when a substantial brick building (now the Meat and Fish Hall) was erected on the corner of Elizabeth and Victoria streets. 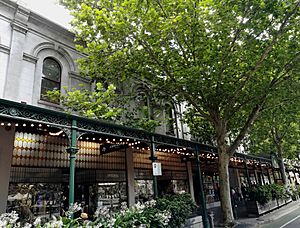 In 1877, construction of A-F sheds began at the Victoria Street end of the site, as it contained the least used section of the cemetery. The Queen Victoria Market officially opened the following year, and the market quickly expanded into wholesale and retail fruit and vegetable trading, which prompted the construction of G, H, I and J sheds. Once completed, the market had grown to occupy two city blocks: one rectangular block bounded by Victoria, Peel, Franklin and Elizabeth streets, and one eastern irregular block bounded by Queen, Victoria, Elizabeth and Therry streets. Shops were built along Elizabeth Street in 1880, and in 1884 the well-known Meat and Fish Hall façade was constructed.

Sheds D, E and F were built on a part of the cemetery originally allocated for Jewish, Aboriginal and Quaker burials. Between 1920 and 1922, 914 bodies were exhumed and re-buried in other cemeteries around Melbourne, notably at the new Fawkner Cemetery. Also in the 1920s, sheds K-L and M were built on part of the cleared cemetery, and in 1930, sixty brick stores were built at the Franklin Street end to house wholesale agents and merchants. However, this was short-lived due allegations of corruption and racketeering, and the findings of a Royal Commission led to the relocation of the Wholesale Market to Footscray in 1969. All that remains today is a row of stores along Franklin Street.

A 1964 City of Melbourne report advocated for redevelopment of the site as a 1200 space car park, which would have become the largest in the city centre.

The separation of the Wholesale Market from the Retail Market led to a plan to redevelop the Queen Victoria Market site into a trade centre, office and hotel complex in the 1970s. However, public outcry and a green ban prevented this and resulted in the Market being classified by the National Trust. The Market site and its buildings were listed on the Historic Buildings Register. 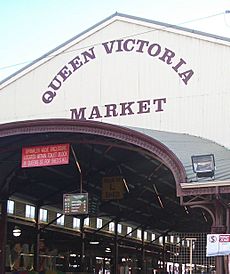 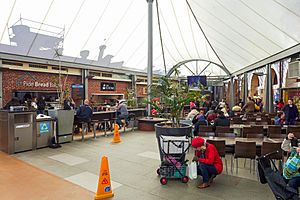 The Queen Victoria Market survives today as the largest and most intact of Melbourne's great nineteenth century markets. It is a major tourist destination in Melbourne, adding to its social and cultural significance. It is open every day of the week except Mondays and Wednesdays. On Wednesday evenings in the summer months, a night market is held which offers dining, bars, live entertainment and a variety of other stalls. It offers a variety of fruit and vegetables, meat, poultry and seafood, gourmet and delicatessen foods as well as specialty delicacies. It also has a large non-food related market, selling a diverse range of clothing, shoes, jewellery and handmade arts and crafts.

Minor upgrades and re-development activities have continued from the late twentieth-century through to the present time. In 2003 the market was equipped with solar panels that harness enough energy to power all the market's clients, and provide a surplus. In January 2010, the Herald Sun reported that city planners wanted to transform the market into a "gourmet hub" by introducing upmarket food stalls. Lord Mayor Robert Doyle said he brought up the idea after visiting London's Borough Market, which has a "boutique" feel that could work in Melbourne. In May 2015 the City of Melbourne draft 2015–16 budget allocated $80.64 million for investment in the Queen Victoria Market. Doyle and Environment Minister Greg Hunt announced the beginning of the process to nominate the market as a UNESCO World Heritage Site. 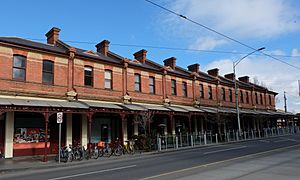 Many of the original structures remain intact, presenting visitors with nineteenth century streetscapes and a working market place. The Meat Hall, constructed in 1869, remains largely intact and is the oldest of the original buildings. The Elizabeth Street facade is predominantly intact in relation to its 1884 construction, while the arched north-west and south-east elevations are substantially intact in relation to their 1869 construction. The retail rows in Elizabeth and Victoria Streets, constructed between 1882 and 1891, are important and architecturally significant buildings, affording visitors the opportunity to shop in an extensive and intact 19th century streetscape.

All content from Kiddle encyclopedia articles (including the article images and facts) can be freely used under Attribution-ShareAlike license, unless stated otherwise. Cite this article:
Queen Victoria Market Facts for Kids. Kiddle Encyclopedia.