Kids Encyclopedia Facts
This page is about the island near Norfolk Island. For other places, see Phillip Island and Philip Island (British Columbia). 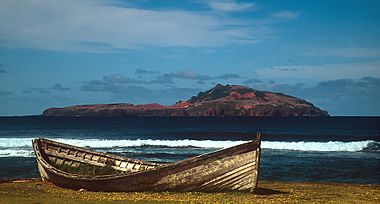 A National Parks hut located near the centre of the island houses a small rotating group of around four people for much of the year. Otherwise the island is uninhabited.

Phillip Island has an area of 190 hectares (470 acres), measuring 2.1 km (1.3 mi) from west to east and 1.95 km (1.21 mi) from north to south, with the highest point, Jacky Jacky, being 280 m (920 ft) above sea level. It is roughly shaped like a hairdryer with the nozzle pointing east. The island is of volcanic origin, made of basaltic tuff and lava dating from the Miocene epoch. Phillip Island is included on the Register of the National Estate.

View from Norfolk Island showing Phillip Island in the distance. In the foreground is the smaller Nepean Island 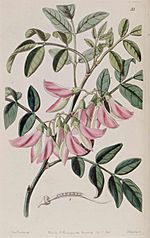 The vegetation of Phillip Island was devastated due to the introduction, during Norfolk's penal colony era, of pest animals such as pigs, goats and rabbits. This caused massive erosion, giving the island a reddish-brown colour as viewed from Norfolk, due to the absence of topsoil. However, the pigs and goats were removed by the early 20th century, and rabbits were exterminated by 1988.

Since then, natural regeneration of native species and weeds, and remediation work by park staff, has brought considerable improvement to Phillip Island's environment. Revegetation is currently underway. A substantial proportion of the areas which were bare before rabbit eradication began is now well vegetated, though much is weed species. Considering most of the island's surface was completely devoid of vegetation before rabbit control, the rate of vegetation development and soil formation is extraordinary. Burrow-nesting seabirds now have colonies where soil was absent before rabbit eradication.

Phillip Island has a vascular flora of about 7001800000000000000♠80 species. Three plant species are endemic to Phillip Island. (Achyranthes margaretarum) was discovered there after the rabbits had gone, and the current small population of this species is derived from the single original plant discovered. (Abutilon julianae) was rediscovered on Phillip Island when the rabbits had almost been eradicated; it had been believed extinct for more than seventy years. The third plant that grows only on this island is the (Hibiscus insularis).

Despite the environmental degradation, the lack of feral cats and rats on the island has allowed some animals to persist there after having become extinct on Norfolk. However, there are extinct species that lived on both islands, such as the Norfolk kaka. Two terrestrial reptiles—a gecko (Christinus guentheri), and a skink (Cyclodina lichenigera)—have been recorded. The island is also an important breeding site for 12 species of seabirds, including the providence petrel, Kermadec petrel, white-necked petrel, black-winged petrel, wedge-tailed shearwater, Australasian gannet, sooty tern (known locally as the whale bird), red-tailed tropicbird, and grey noddy. The sooty tern has traditionally been subject to seasonal egg harvesting.

Phillip Island has been identified by BirdLife International as an Important Bird Area (IBA), separate from the Norfolk Island IBA, because it supports small but increasing populations of providence and white-necked petrels as well as over 1% of the world population of grey noddies.

All content from Kiddle encyclopedia articles (including the article images and facts) can be freely used under Attribution-ShareAlike license, unless stated otherwise. Cite this article:
Phillip Island (Norfolk Island) Facts for Kids. Kiddle Encyclopedia.