The red-tailed tropicbird, Phaethon rubricauda, is a seabird that nests across the Indian and Pacific Oceans. It is the rarest of the tropicbirds, but is widespread and not considered threatened. It nests in colonies on oceanic islands. 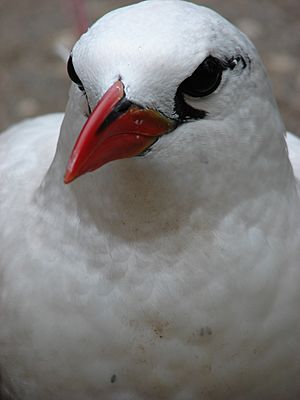 The red-tailed tropicbird measures 95 to 104 cm (37 to 41 in) on average, which includes the 35 cm (14 in)-long tail streamers, and weighs around 800 g (28.2 oz). It has a wingspan of 111 to 119 cm (44 to 47 in). It has a streamlined but solid build with almost all-white plumage, often with a pink tinge. The sexes are similar in plumage. A dark brown comma-shaped stripe extends back from the lores, through and over the eyes and reaching the ear coverts. The iris is dark brown. The bill is bright red, slightly paler at the base and black around the nostrils. The legs and base of the toes are pale blue-mauve, while the webbing and rest of the toes are black. The white feathers of the head and rump have concealed dark brown bases, while those of the mantle, back, tail rectrices and tail coverts have dark brown shaft bases. The two long tail feathers are orange or red with white bases for around a tenth of their length, and can be hard to see when the bird is flying. The white wings are marked by dark chevron-shaped patches on the tertials, and the dark shafts of the primary flight feathers are visible. The pink tinge is often more pronounced in the remiges of the upper wing. Moulting takes place outside the breeding season, the streamers being replaced before the rest of the feathers. Streamers are replaced at any time, one growing while the other is shed, and old streamers may litter the area around a breeding colony.

Newly-hatched chicks are covered in thin long grey-white down, which is paler on the head. The lores are bare. The down is greyer in older chicks. The primaries, rectrices and scapulars are evident in the third week, and chicks are mostly feathered with residual down on underparts and under the wings after six weeks, and fully feathered by 11 weeks. Juvenile birds have a glossy white forehead, chin, throat and underparts, and prominent black barring and scaling on their crown, nape, mantle, back, rump and upper wing coverts. Their bills are blackish grey with a light blue-grey base, and grey legs and feet.

The red-tailed tropicbird is generally silent while flying. Aside from during courtship displays, birds may give a short greeting squawk to their mate when arriving or leaving the nest. Birds give a low growling call as a defence call, and young chatter repetitively as a begging call—made whenever the parents are nearby.

The red-tailed tropicbird ranges across the southern Indian, and western and central Pacific Oceans, from the African coast to Indonesia, the waters around the southern reaches of Japan, across to Chile, and the Hawaiian Islands, where they are more common on the northwestern islands. There are large breeding colonies on Europa, Aldabra and Christmas Islands in the Indian Ocean, with smaller colonies in Madagascar, where it nests on the tiny island of Nosy Ve, the Seychelles, and Mauritius. In Australia, it nests on Queensland's coral islands (including Raine Island and Lady Elliot Island), and Ashmore Reef and Rottnest Island off Western Australia, as well as Sugarloaf Rock at Cape Naturaliste and Busselton on the Western Australian coastline itself, and the offshore territories of the Cocos (Keeling) Islands, Norfolk and Lord Howe islands. In New Zealand territory it breeds on the Kermadec Islands. Elsewhere in the Pacific it breeds in Fiji, New Caledonia, French Polynesia, Hawaii, with a large colony on Kure Atoll, the Cook Islands, Pitcairn Island, and islands off Japan and Chile.

It frequents areas of ocean with water temperatures from 24 to 30 °C (75 to 86 °F) and salinity under 35% in the southern hemisphere and 33.5% in the northern hemisphere. In the Pacific Ocean, the southern boundary of its range runs along the 22 °C (72 °F) summer surface isotherm. The warm waters of the Leeuwin Current facilitate the species nesting at Cape Leeuwin in southwestern Australia, yet is only a rare visitor to New South Wales at corresponding latitudes on the Australian east coast.

It is an occasional visitor to Palau, breeding being recorded from the Southwest Islands, and was first recorded from Guam in 1992. It is an uncommon vagrant to New Zealand proper, where it has been recorded from the northern reaches of North Island, especially Three Kings Islands. It is a very rare vagrant to North America, with records from California and Vancouver Island.

The birds disperse widely after breeding. Evidence suggests birds in the Indian Ocean follow prevailing winds westwards, young individuals banded in Sumatra and Sugarloaf Reserve, Western Australia, being recovered at Mauritius and Reunion respectively. Banding on Kure Atoll suggests birds in the North Pacific disperse in an easterly direction, following prevailing winds there. Strong winds can blow them inland on occasions, which explains some sighting records away from the coast and their preferred habitats.

The red-tailed tropicbird is a strong flyer, and walks on land with difficulty using a shuffling gait. 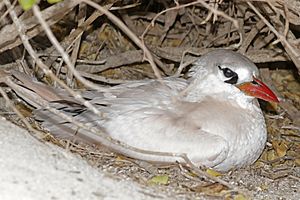 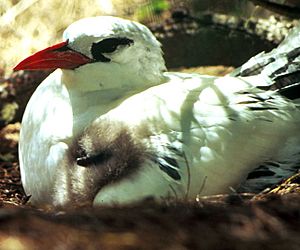 Nesting and sheltering chick under its wing 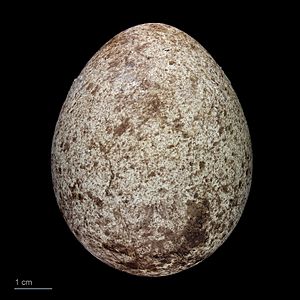 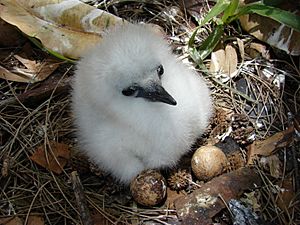 Young chick with down 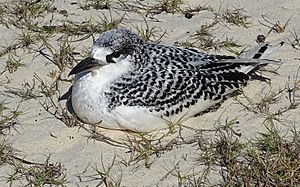 The red-tailed tropicbird is thought to be monogamous, pairs remaining bonded over successive breeding seasons, although information such as age at first breeding and pair-formation is not known. It nests in loose colonies, on offshore islands and stacks, rocky cliffs, coral atolls and cays. It rarely nests on large bodies of land, though has done so in southern Western Australia. The nest itself is a shallow scrape, in either shaded sand or a rocky crevice, or under a shrub. Because the red-tailed tropicbird does not walk well, it lands by flying into the wind, stalling and dropping to the ground. The nest is often located within one metre (3.3 ft) of the edge of the shrub (or other shaded area) to minimise walking distance. The tropicbird often chooses shrubs with fewer stems for accessibility.

The species is territorial to a degree, aggressively defending the nest site and pecking radius around it, commencing around three months before breeding. Birds are more aggressive at crowded colonies, where numbers are large or suitable nest sites less common. They adopt a defence posture, which consists of raising the humeri up and bringing the wrists together, drawing the neck into the body and shaking the head sideways, fluffing up the head feathers and squawking. Bill-jabbing and fights can break out, the two combatants locking bills and wrestling for up to 90 minutes.

Mate choice is likely to be partially based on the length of the tail streamers, a bird having longer tail streamers being more attractive as a mate. This tropicbird also probably mates assortatively for tail streamer length, meaning mates likely have streamers of about equal length.

In the leadup to breeding, males initiate an aerial courtship display of flying in large circles, alternating between gliding, short periods of rapid wing-beating, and low flight within a few metres of the water, while making sharp cackling calls. Initially flying in small groups, birds then pair off to repeat the display in pairs before bonding. Once pairs have established a nest, they do not perform the display.

The timing of breeding depends on location; in some places, birds breed in a defined breeding season, whereas in others, there is none. South of the equator, the latter is likely to be true. On islands near the equator, laying usually occurs from June to November, the majority of chicks fledging around January to February. On Christmas Island, breeding takes place at different times on different parts of the island due to prevailing weather conditions. Some birds may remain at the breeding site year-round.

The female red-tailed tropicbird lays one egg, which both parents incubate for 42 to 46 days. The male generally takes the first turn on the egg after it is laid. Ranging from 5.4 to 7.7 centimetres (2.1 to 3.0 in) long (averaging between 6.3 and 6.8 centimetres (2.5 and 2.7 in), depending on location) and 4.5 to 4.8 centimetres (1.8 to 1.9 in) wide, the oval eggs are pale tan with brown and red-black markings that are more prominent on the larger end. Born helpless and unable to move around (nidicolous and semi-altricial), the chicks are initially blind, opening their eyes after 2–3 days. Until they are a week old, they only open their beak upon touch, so the parents have to stroke the base of the bill to initiate feeding. Feeding takes place once or twice a day, generally around midday. They are constantly brooded by the parents until they are a week old, after which time they are sheltered under the parent's wings. They also rise up and gape at any nearby bird for food. Chicks remain in the nest for 67 to 91 days until they fledge.

The red-tailed tropicbird is mostly a plunge-diver, diving anywhere from an above-water height 6 to 50 metres (20 to 164 ft), to a depth of about 4.5 metres (15 ft), although this may change seasonally. When diving, it remains briefly submerged—one study on Christmas Island came up with an average time of 26.6 seconds—generally swallowing its prey before surfacing. The red-tailed tropicbird sometimes catches flying fish in the air.

During incubation, foraging trips are relatively long, with an average excursion taking about 153 hours. These trips are to very productive areas. After the chicks hatch, on the other hand, the parents adopt a strategy where one takes long trips (these averaging about 57 hours) for self feeding, and the other takes short trips (about three hours long) to feed the chicks. The bimodality of the length of foraging trips is likely to be because of the fact that it is the optimal balance of self-feeding and provisioning for chicks. On Christmas Island, birds generally forage far out to sea in the early morning and closer to shore in the afternoon.

Squid and flying fish make up a large portion of this bird's diet, along with some crustaceans, depending on location. Fieldwork in the Mozambique Channel revealed the diet of birds there to be mostly fish by mass but equal numbers of fish and squid caught. Fish recorded include the mirrorwing flyingfish (Hirundichthys speculiger) and spotfin flyingfish (Cheilopogon furcatus) and several other unidentified species of the flying fish family Exocoetidae, the pompano dolphinfish (Coryphaena equiselis) and common dolphinfish (C. hippurus), needleflish including the houndfish (Tylosurus crocodilus), and unidentified members of Hemiramphidae, Scombridae, and Carangidae. The purpleback flying squid (Sthenoteuthis oualaniensis) was by far the most common cephalopod eaten, followed by the common blanket octopus (Tremoctopus violaceus). A field study in Hawaii found flying fish dominated the prey species, the tropical two-wing flyingfish (Exocoetus volitans) and members of the genus Cypselurus prominent, followed by squid of the family Ommastrephidae including the purpleback flying squid and the glass squid (Hyaloteuthis pelagica), and carangid fish including the shortfin scad (Decapterus macrosoma). The red-tailed tropicbird has also been recorded eating porcupinefish (Diodontidae), although adults have been troubled when the victim fish inflates resulting in it being urgently regurgitated.

A strong flyer with large mouth and bill, the red-tailed tropicbird can carry relatively large prey for its size, parent birds commonly bearing dolphin fish that weighed 120 g—16% of their own weight—to their chicks.

The red-tailed tropicbird's tail streamers were highly prized by the Maori. The Ngāpuhi tribe of the Northland Region would look for and collect them off dead or stray birds blown ashore after easterly gales, trading them for greenstone with tribes from the south. English naturalist Andrew Bloxam reported that the feathers were valued in Hawaii, where the locals would pull them off the birds as they nested.

All content from Kiddle encyclopedia articles (including the article images and facts) can be freely used under Attribution-ShareAlike license, unless stated otherwise. Cite this article:
Red-tailed tropicbird Facts for Kids. Kiddle Encyclopedia.