The sooty tern (Onychoprion fuscatus) is a seabird in the family Laridae. It is a bird of the tropical oceans which sleeps on the wing, returning to land only to breed on islands throughout the equatorial zone.

The sooty tern was described by Carl Linnaeus in 1766 as Sterna fuscata, bearing this name for many years until the genus Sterna was split up. It is now known as Onychoprion fuscatus. The genus name is from ancient Greek onux, "claw" or "nail", and prion, "saw". The specific fuscatus is Latin for "dark".

Colloquially, it is known as the wideawake tern or just wideawake. This refers to the incessant calls produced by a colony of these birds, as does the Hawaiian name ʻewa ʻewa which roughly means "cacophony". In most of Polynesia its name is manutara or similar – literally "tern-bird", though it might be better rendered in English as "the tern" or "common tern". This refers to the fact that wherever Polynesian seafarers went on their long voyages, they usually would find these birds in astounding numbers. It is also known as kaveka in the Marquesas Islands, where dishes using its eggs are a delicacy.

The sooty tern has little interspecific variation, but it can be divided into at least two allopatric subspecies. Some recent authors further subdivide the Indopacific population into up to 8 subspecies altogether, but much of the variation is really clinal. The affinities of eastern Pacific birds (including the famous manutara of Easter Island) are most strongly contested.

Onychoprion fuscatus nubilosus (Sparrman, 1788) – Indopacific sooty tern
Underparts light grey in fresh plumage, dull white in worn plumage. Breeds from Red Sea across Indian Ocean to at least central Pacific. Some authors restrict this taxon to the Indian Ocean population and use the following subspecies for the birds from Indonesia to the Americas: 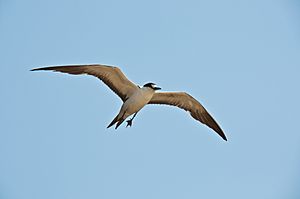 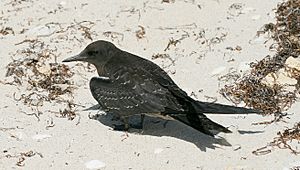 This is a large tern, similar in size to the Sandwich tern (Thalasseus sandvicensis) at 33–36 cm (13–14 in) long with an 82–94 cm (32.5–37 in) wingspan. The wings and deeply forked tail are long, and it has dark black upperparts and white underparts. It has black legs and bill. The average life span is 32 years. Juvenile sooty terns are scaly grey above and below. The sooty tern is unlikely to be confused with any tern apart from the similarly dark-backed but smaller bridled tern (O. anaethetus). It is darker-backed than that species, and has a broader white forehead and no pale neck collar. 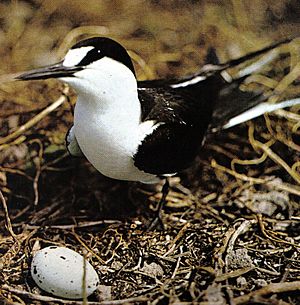 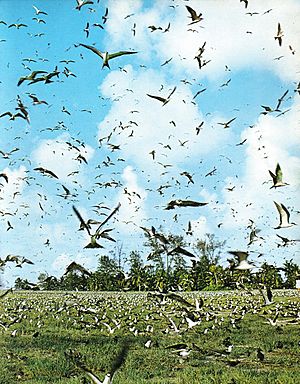 O. f. nubilosus at Bird Island, Seychelles, home to more than a million of sooty terns at its peak

Sooty terns breed in colonies on rocky or coral islands. It nests in a ground scrape or hole and lays one to three eggs. It feeds by picking fish from the surface in marine environments, often in large flocks, and rarely comes to land except to breed, and can stay out to sea for 3 to 10 years. Due to the lack oil in its feathers, it cannot float, and spends that entire time on the wing.

This bird is migratory and dispersive, wintering more widely through the tropical oceans. It has very marine habits compared to most terns; sooty terns are generally found inland only after severe storms. The Field Museum, for example, has a male specimen which was found exhausted on August 2, 1933 on the slopes of Mount Cameroon above Buea, about 1,000 m (3,300 ft) ASL, after foul weather had hit the Gulf of Guinea. This species is a rare vagrant to western Europe, although a bird was present at Cemlyn Bay, Wales for 11 days in July 2005.

It is also not normally found on the Pacific coasts of the Americas due to its pelagic habits. At Baja California, where several nesting locations are offshore, it can be seen more frequently, whereas for example only two individuals have ever been recorded on the coast of El Salvador - one ring recovered in 1972, and a bird photographed on October 10, 2001 at Lake Olomega

An exceptionally common bird, the sooty tern is not considered threatened by the IUCN.

On Easter Island, this species and the spectacled tern (O. lunatus) are collectively known as manutara. The manutara played an important role in the tangata manu ("birdman") ritual: whichever hopu (champion) could retrieve the first manutara egg from Motu Nui islet would become that year's tangata manu; his clan would receive prime access to resources, especially seabird eggs.

All content from Kiddle encyclopedia articles (including the article images and facts) can be freely used under Attribution-ShareAlike license, unless stated otherwise. Cite this article:
Sooty tern Facts for Kids. Kiddle Encyclopedia.