Caesars Atlantic City is a luxury hotel, casino, and spa resort in Atlantic City, New Jersey. Like Caesars Palace in Las Vegas, it has an ancient Roman and ancient Greek theme. Atlantic City's second casino, it opened in 1979 as the Boardwalk Regency. The 124,720 sq ft (11,587 m2). casino has over 3,400 slot machines, and is one of the largest in Atlantic City. The resort has experienced much expansion and renovation in the past decade, including a new hotel tower, a new parking garage, and a new shopping center, Playground Pier.

The Howard Johnson's Regency Motor Hotel first opened in 1966. In 1977, Caesars purchased the hotel and announced it would renovate the 11-story, 425-room structure and add seven floors to the building, expanding the room count to 548, plus a 52,000 sq.ft. casino at an estimated cost of $300 million. Despite the governor of New Jersey's demands, the Casino Control Commission allowed Caesars to use the Howard Johnson building due to it being relatively new construction. The casino opened on June 26, 1979 being the second casino to open after Resorts International in 1978. The casino first opened as the Boardwalk Regency, omitting the Caesars name, as the Casino Control Commission continued to investigate the corporation. In 1983 Caesars was added to the name and it became Caesars Boardwalk Regency.

In 1987, the name of the resort was changed to Caesars Atlantic City. Throughout the late 1990s and 2000s, Caesars expanded the Roman theme to the exterior, which originally had an art deco look. Renovations were completed in 2008, with the Boardwalk and street sides of the casino being renovated into Roman facades, along with a new parking garage and a new hotel tower.

In October 2017, ownership of Caesars was transferred to Vici Properties as part of a corporate spin-off, and the property was leased back to Caesars Entertainment.

In 2020, Caesars Entertainment announced Renovations and repairs for all 3 owned casinos in Atlantic City including Tropicana, Caesars, and Harrahs. 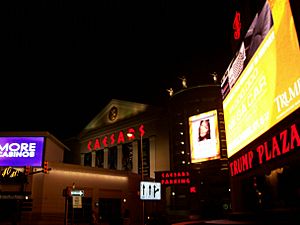 There are several restaurants located around the Caesars property:

Qua Baths & Spa is located in the Ocean Tower. The Bellezza Salon is located in the Centurion Tower. There is an outdoor pool at Caesars. Guests are welcome to go to Bally's indoor pool which is adjacent to the property. You are charged a fee to use the pool at Bally’s of 30 dollars per person. The Beach at Caesars is located on the right side of the Pier Shops at Caesars, just in front of the casino. Caesars features these nightlife areas: Dusk Nightclub and 21 Sports Bar at Dusk, the Boardwalk Beer Garden, and Toga Bar. Concerts and shows can be seen at the Circus Maximus Theater.

Dusk is on the second floor and was opened in 2009. The 8,500 square foot nightclub is owned and operated by The Dusk Management Group, and was built with the design concept of concentric circles, on three levels. Philadelphia native Adam Goldstein (aka DJ AM) was a part owner who also performed at the club. The venue was the last location that Goldstein performed before his death in 2010.

Playground Pier is a shopping mall located on the four-story Pier at Caesars adjacent to Caesars and connected via a second-story skybridge.

Other stores located within Caesars include Caesars Exclusively, Emperor's Essentials, and A Time for Wine.

Boxing and mixed martial arts matches are held at the casino.

All content from Kiddle encyclopedia articles (including the article images and facts) can be freely used under Attribution-ShareAlike license, unless stated otherwise. Cite this article:
Caesars Atlantic City Facts for Kids. Kiddle Encyclopedia.