Playground Pier is a four-story pier located on the Boardwalk in Atlantic City, New Jersey that houses a luxury shopping and restaurant mall. Located at the foot of Arkansas Avenue, it is connected to Caesars casino via a second-story skybridge, and is about 900 feet long, with its far end extending over the Atlantic Ocean.

The pier once included many upscale stores, such as Tourneau, Gucci, Louis Vuitton, Armani A/X, but was plagued with high vacancy rates by the late 2010s.

Panoramic view of The Pier Shops at Caesars

As configured after the pier's 2006 reopening, the mall's four floors have been: 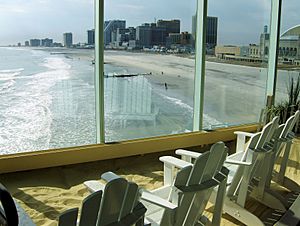 The Beach at The Pier

Million Dollar Pier was built by Captain John L. Young in partnership with Kennedy Crossan a builder from Philadelphia. Young was an experienced showman who in 1891 had begun operating Young's Ocean Pier in Atlantic City (on the site where Central Pier was later located). In 1906 he announced that he was going to build a new pier "to cost a million dollars!" at the foot of Arkansas Avenue. The new pier opened as Young's Million Dollar Pier on July 26, 1906, with a length of 1,900 feet (580 m). It was owned by Associated Realties Company, a corporation that was owned by Young and Crossan. The Million Dollar Pier had what was claimed to be the world's largest ballroom, as well as a Hippodrome Theater with 4,000 seats, Exhibit Hall, Greek Temple, aquarium and a roller skating rink. In 1908 Young built a mansion on the pier for himself, with the address as "No. 1 Atlantic Ocean." At the ocean end of the pier, there were daily fish net hauls that were often directed by Captain Young himself.

During its early decades, the pier also hosted many conventions and events, including the 1925 Miss America Pageant. Dance Marathons were held at the pier from 1931 to 1933. During the 1930s the pier offered a circus, vaudeville acts, orchestras, movies, net hauls and swimming (with locker facilities provided). The pier, however, struggled financially and its owner, Associated Realties Company, went into bankruptcy in 1936. The reorganized company that emerged from bankruptcy was still owned by members of the Crossan family, but Captain Young was no longer its president. Young died at his winter home in West Palm Beach, Florida on February 15, 1938 at the age of 84.

George Hamid, a circus owner, took over operations of the pier in 1938. Hamid undertook an extensive renovation program to modernize the pier, which was rebranded as Hamid's Million Dollar Pier. In 1945 Hamid bought the Steel Pier, but continued to operate the Million Dollar Pier until late 1948.

1949 proved to be a pivotal, chaotic and disastrous year for the Million Dollar Pier. In February 1949 the pier was leased to a New York syndicate headed by George J. Costello for a period of five years. When the pier opened for the 1949 season, no admission fee was charged for the first time in pier history. Instead, customers paid a separate charge for each amusement in which they wanted to partake. By early July, the pier was again charging an admission fee (20 cents), but dropped it by the end of July. Some planned entertainment could not be provided, and at least one featured performer quit by late July. Pier owner Associated Realties Company instituted litigation to terminate Costello's lease of the pier on the grounds that he had breached the lease by closing parts of the pier early and by failing to spend $25,000 on pier improvements. Shortly after the eviction suit was filed, an arsonist set fire to the pier on September 13, 1949. The fire caused extensive damage and about 300 feet of the pier, including the ballroom, skating rink and aquarium, were destroyed, with the damage concentrated near the Boardwalk end of the pier. In late September, a judge terminated Costello's lease of the pier.

When the pier reopened for the 1950 season, the area closest to the Boardwalk that was previously occupied by the ballroom was an open deck containing rides, concessions and other attractions. Admission to the pier was free, with guests charged separately for partaking in amusements. The pier would be run this way until it closed in 1981. From 1950 to 1969 the pier was managed by Max Tubis, who became a part-owner of the pier in 1963.

In 1953 Captain Young's former mansion, No. 1 Atlantic Ocean, was demolished. The pier suffered relatively minor damage in a 1957 fire caused by an electrical short in a sign on the old Hippodrome Theater, which by that time was used for storage. During Hurricane Donna in 1960 the pier lost a 50-foot section over the ocean. This damage was not repaired, and by 1970 there were several sections of old pier over the ocean that were disconnected from the remainder of the pier. The pier was purchased by a group of local businessmen in 1969. In 1970 the old Hippodrome Theater building was demolished to add space for more amusements. In 1980 a new pier owner, shopping mall developer Kravco Inc., announced plans to build a new shopping mall pier on the site that would house stores and restaurants. In October 1981, while the pier was being demolished, a suspicious fire destroyed much of what was left of Million Dollar Pier. The remnants of the old pier were then removed, and a completely new pier built.

Caesars Entertainment stated they are investing money to get shops and restaurants into the pier to get it up to the 75+ stores and restaurants it once had in its heyday., Renovations would also be done to this pier in places its needed.

The Ocean One Mall was acquired in 2002 by Gordon Group Holdings and underwent a major redevelopment. Ocean One was torn down to its skeleton and when the pier reopened in 2006 it was renamed The Pier Shops at Caesars. In 2007 Taubman Centers purchased the center.

Taubman Centers defaulted on its $135 million loan on the center in 2010, and it was taken over by its mortgage servicer, C-III Capital Partners. The lenders failed to successfully auction the mall and hired Cushman & Wakefield to manage the center. In the 2010s after Taubman's bankruptcy, vacancy problems began to plague the pier, part of the wider problem of "ghost malls" in the United States with the rise of competition from Internet shopping retailers, as well as Atlantic City struggling with the steady expansion of casino gaming to other states. Originally, there were over 75 stores at the Pier during its thriving period; this number fell to 59 stores in 2013.

By 2019, the Playground Pier had been much reduced to only 10 current stores. Choice retailers such as the Apple Store, Tommy Bahama, and Gucci failed to renew leases and left, with only the restaurants on the third floor staying.

In early 2020 the pier was sold by Bart Blatstein to a subsidiary of Caesars Entertainment.

Caesars Entertainment stated they are investing money to get shops and restaurants into the pier to get it up to the 75+ stores and restaurants it once had in its heyday. Needed renovations would also be completed. 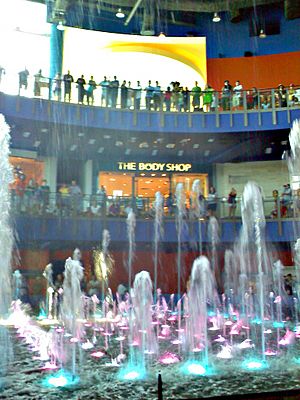 "The Show" was the world's largest indoor water fountain display in a shopping mall. The fountain was choreographed and set to music. The show was performed on the hour and had two variations: a day show and a night show. The show was routinely met with applause from audiences and the most popular viewing spot was usually from the mall's second floor. “The Show” was conceptualized, designed and produced by Thinkwell Group.

As of March 2015, the fountains were covered by flooring and the show was no longer taking place.

All content from Kiddle encyclopedia articles (including the article images and facts) can be freely used under Attribution-ShareAlike license, unless stated otherwise. Cite this article:
Playground Pier Facts for Kids. Kiddle Encyclopedia.