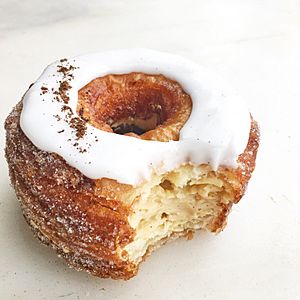 The Cronut is a croissant-doughnut pastry. It resembles a doughnut and is made from croissant-like dough which is filled with flavored cream and fried in grapeseed oil.

The Cronut was invented in 2013 by French-American pastry chef Dominique Ansel. 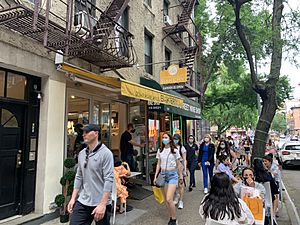 In 2013, bakery owner Dominique Ansel created the pastry out of dough similar to that of a croissant (a pastry that he had been more familiar with) with flavored cream inside.

The Cronut was introduced on May 10, 2013 at Ansel's bakery, Dominique Ansel Bakery, in New York's Soho neighborhood. On the same night, a blogger from Grub Street, the online restaurant blog from New York magazine, reported on the new pastry. The post resulted in much interest and online circulation, and by the third day, a line of over 100 people had formed outside the shop to buy it.

Within nine days of introducing the pastry to the Bakery's menu, Ansel filed for a trademark for the "Cronut" name at the United States Patent and Trademark Office, which was approved.

After the release of the Cronut, similar products have sprung up throughout the world including some with different names such as the Kelownut in Kelowna, Canada.

Dominique Ansel released an At-Home Cronut Recipe in his cookbook, Dominique Ansel: The Secret Recipes, in 2015, for bakers to attempt in their own homes. Like the original pastry made at Ansel's bakeries, the process also takes three days.

All content from Kiddle encyclopedia articles (including the article images and facts) can be freely used under Attribution-ShareAlike license, unless stated otherwise. Cite this article:
Cronut Facts for Kids. Kiddle Encyclopedia.