He hit 512 home runs in his career. Very few players have hit more than 500 home runs in their careers. He was elected to the Baseball Hall of Fame in 1977. He was known as "Mr. Cub".

In 2013, he was awarded the Presidential Medal of Freedom by President Barack Obama.

Banks was born in Dallas, Texas and went to Booker T. Washington High School in that city. He was a very good athlete. He won "letters" in football, basketball and track. He graduated in 1950. 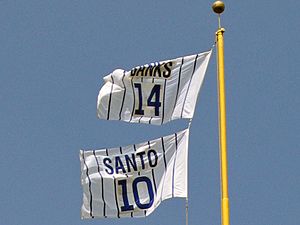 Banks signed with the Kansas City Monarchs of the Negro American League in 1950. He broke into the Major Leagues in 1953 with the Chicago Cubs. He was their first black player. He played for the Cubs his entire career. He started at shortstop, then moved to first base in 1962.

In 1955, he set the record for grand slam home runs in a single season with five. That record stood for over thirty years.

During Banks' career, the Cubs as a team often played poorly. They started to play better late in his career, but they never got into the playoffs. Banks holds the Major League record for most games played without a playoff appearance (2,528).

In 1977 Banks was elected to the Baseball Hall of Fame. The beginning of Banks' speech that August 8 can be heard on a CD called Baseball's Greatest Hits Vol. II. Commissioner of Baseball Bowie Kuhn presents Banks, who then says, "Thank you very much, Commissioner, for the fine introduction. We've got the setting - sunshine, fresh air; we've got the team behind us so . . . 'Let's play two!"

Banks had worn number 14 on his Cubs uniform. In 1982 he became the first Cubs players whose number was retired by the team.

On March 31, 2008, a statue of Banks was put outside Wrigley Field. The base of the statue repeats his famous saying, "Lets play two!"

Banks died of a heart attack at a Chicago hospital on January 23, 2015, eight days before his 84th birthday. His death was announced by his lawyer in that same day. He was buried in Graceland Cemetery, just a few blocks north of Wrigley Field.

All content from Kiddle encyclopedia articles (including the article images and facts) can be freely used under Attribution-ShareAlike license, unless stated otherwise. Cite this article:
Ernie Banks Facts for Kids. Kiddle Encyclopedia.