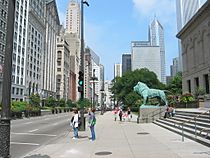 The north side of the avenue

Michigan Avenue is a major north-south street in Chicago. It runs at 100 east on the Chicago grid. The northern end of the street is at Lake Shore Drive on the shore of Lake Michigan in the Gold Coast Historic District. The avenue is named after the state of Michigan. The avenue is also known for shopping stores, museums, and tall buildings. Part of Michigan Avenue is called the Magnificent Mile.

It is the location of the annual November Magnificent Mile Lights Festival hosted by Disney.

All content from Kiddle encyclopedia articles (including the article images and facts) can be freely used under Attribution-ShareAlike license, unless stated otherwise. Cite this article:
Michigan Avenue Facts for Kids. Kiddle Encyclopedia.