Camden is a city in Benton County, Tennessee, United States. The population was 3,582 at the 2010 census. It is the county seat of Benton County. 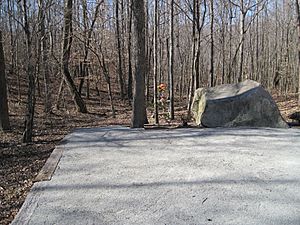 Patsy Cline Memorial at the 1963 crash site near Camden

Native Americans were living in the Camden area as early as the Archaic period (8000-1000 BC). A significant archaeological site has been excavated at nearby Eva (the actual site is now submerged under Kentucky Lake), uncovering evidence of semi-permanent habitation dating back 7000 years.

The first European settlers arrived in the Benton County area around 1818, shortly after (and probably before) the county was purchased from the Chickasaw. Camden has its roots as a stopover along the stage coach route between Nashville and Memphis. Initially known as "Tranquility", the community had attained the name "Camden" by the 1830s, a name influenced by the Revolutionary War-era Battle of Camden. When Benton County was created in 1835, Camden was chosen as the county seat. The City of Camden was officially incorporated in 1838.

It was near Camden where country music stars Patsy Cline, Cowboy Copas, and Hawkshaw Hawkins lost their lives in a plane crash on March 5, 1963.

Camden is situated along Cypress Creek, near the creek's modern confluence with the Kentucky Lake impoundment of the Tennessee River (the original lower 10 miles (16 km) of the creek were entirely engulfed by the lake with the completion of Kentucky Dam in 1944). The area is characterized by low hills to the north and west and wetlands to the east, the latter of which are largely protected by the Camden Wildlife Management Area.

According to the United States Census Bureau, the city has a total area of 5.7 square miles (14.7 km2), all of it land. 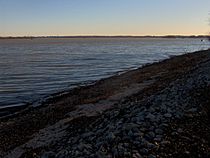 The Tennessee River near Camden

There were 1,631 households out of which 24.2% had children under the age of 18 living with them, 46.5% were married couples living together, 13.2% had a female householder with no husband present, and 37.8% were non-families. 35.1% of all households were made up of individuals and 19.9% had someone living alone who was 65 years of age or older. The average household size was 2.19 and the average family size was 2.81. 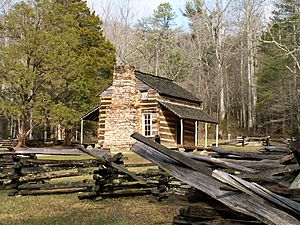 The William Thompson House is one of four sites in Camden listed on the National Register of Historic Places.

All content from Kiddle encyclopedia articles (including the article images and facts) can be freely used under Attribution-ShareAlike license, unless stated otherwise. Cite this article:
Camden, Tennessee Facts for Kids. Kiddle Encyclopedia.