Fayette County is a county located in the U.S. state of Tennessee. As of the 2010 census, the population was 38,413. Its county seat is Somerville. The county was named after the Marquis de la Fayette, French hero of the American Revolution.

Fayette County is part of the Memphis, TN–MS–AR Metropolitan Statistical Area. It is considered part of the Mississippi Delta and was a major area of cotton plantations dependent on slave labor in the nineteenth century.

Rhea "Skip" Taylor is currently the county mayor. Fayette County has a 19 person legislative body referred to as the Board of County Commissioners. All positions are elected every four (4) years along with the County Mayor. 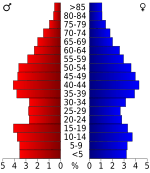 Since the four-lane expansion of Highway 64 in the early 1990s, western Fayette County has had a population explosion. Although the county seat is still in Somerville, the population of Oakland has far surpassed it because of the influx of people working in Shelby County and seeking more affordable housing.

Although Fayette County is growing on its western side, the county's economy is still based on agriculture. Historically it was a site of cotton plantations as part of the Mississippi Delta. Several of the county's largest farmers, including the Rhea, Walker, German, Armour, and Karcher families, control the vast majority of the county's wealth. Some of these families have been farming for generations dating back to plantations before the Civil War. Others are younger farmers who have used their skill, business savvy, and work ethic to develop large farming operations.

Fayette County has become a destination for upscale residential housing outside of Memphis and Shelby County, TN, for high income families of the metro area. The total value for building permits in June 2007 was close to that of the much larger Memphis suburban area of DeSoto County, Mississippi.

All content from Kiddle encyclopedia articles (including the article images and facts) can be freely used under Attribution-ShareAlike license, unless stated otherwise. Cite this article:
Fayette County, Tennessee Facts for Kids. Kiddle Encyclopedia.