Grand Junction is a city between the border of Hardeman and Fayette County, Tennessee, United States. The population was 325 at the 2010 census, and was estimated to be 303 in 2015.

It has been called the "Bird Dog Capital of the World" and serves as the location of the National Bird Dog Museum. 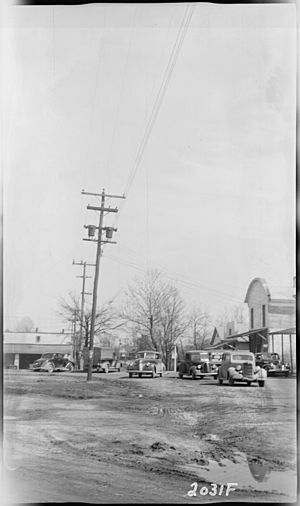 Grand Junction was founded in 1858. It was named after the "Grand Junction" of the Memphis and Charleston Railroad and the Mississippi Central Railroad. The town was a railroad town, with its own newspaper, two saloons, three hotels, a livery stable, and other businesses. During the Civil War, the Union Army held the city for approximately three years. In 1878 a yellow fever epidemic struck the town and killed more than half of the 150 residents. The town was incorporated in 1901.

According to the United States Census Bureau, the city has a total area of 1.2 square miles (3.1 km2), all land.

There were 125 households, out of which 24.0% had children under the age of 18 living with them, 51.2% were married couples living together, 16.8% had a female householder with no husband present, and 30.4% were non-families. 27.2% of all households were made up of individuals, and 19.2% had someone living alone who was 65 years of age or older. The average household size was 2.41 and the average family size was 2.97.

Grand Junction has a humid subtropical climate, with four distinct seasons. The summer months (late May to late September) are persistently hot and humid due to moisture encroaching from the Gulf of Mexico, with afternoon temperatures frequently above 90 degrees Fahrenheit. Afternoon thunderstorms are frequent during some summers, but usually brief, lasting no longer than an hour. Early autumn is drier and mild, but can remain hot until late October. Abrupt but short-lived cold snaps are common. Late autumn is rainy and colder, December being the third rainiest month of the year. Fall foliage becomes especially vibrant after the first frost, typically early November, and lasts until early December. Winters are mild, but cold snaps can occur. Mild spells sometimes occur January and February. Snowfall is not abundant but does occur during most winters, with one or two major winter weather events occurring by the end of March. Spring often begins in late February or early March, following the onset of a sharp warmup. This season is also known as "severe weather season" due to the higher frequency of tornadoes, hail, and thunderstorms producing winds greater than 58 mph (93 km/h). Average rainfall is slightly higher during the spring months than the rest of the year. Historically, April is the month with the highest frequency of tornadoes, though tornadoes have occurred every month of the year. Grand Junction-area historical tornado activity is above Tennessee state average, and 155% greater than the overall U.S. average. Grand Junction is sunny about 62.5% of the time.

The National Bird Dog Museum (NBDM) is located in Grand Junction, as is the Field Trial Hall of Fame and Wildlife Heritage Center, which shares space with the NBDM. The location of the NBDM and the history of the area in regards to hunting has earned the town the title of the "Bird Dog Capital of the World". Ames Plantation, the former home of Hobart Ames, is also located in the area. The town is also home to the National Field Trial Championships, which are held at Ames Plantation. Grand Junction's library, the Bobby Martindale Memorial Library, serves area residents and consists of 1 staff member and volunteers. As of 2011, over 1,380 patrons visited the library, checking out items over 3,300 times. The Wilder Community Center serves as a community hall and senior center. Grand Junction also has one of the oldest and most active Ruritan clubs in Tennessee.

A Christmas parade is held each year with a tree-lighting ceremony, as well the annual community fish fry hosted by the Local Chapter of the Ruritan. It is held the 1st Saturday in October each year and draws from several counties. There is also an annual BBQ Cookoff contest help each year in April that draws a large crowd and plenty of contestants vying for the "Golden Pig".

Many of the original buildings are still maintained within Grand Junction. Rogers and Sons Marble Works, established in 1879, is still standing and the old railroad depot still exists. N.T. Richardson's General Merchandise Store is still standing and stocked from when it finally closed, which was run by N.T. Richardson until his death at 104 years old. The local City Park now serves as the site of the annual community fish fry.

A. Schulman has a manufacturing facility in Grand Junction. The town has many small local businesses, including a clothing boutique, antique shops, two local banks, several quick-marts a Dollar General store and a Family Dollar store.

Grand Junction has one elementary school, Grand Junction Elementary School, as well as a Head Start Program. There is also a newly renovated local library with meeting areas for different events.

All content from Kiddle encyclopedia articles (including the article images and facts) can be freely used under Attribution-ShareAlike license, unless stated otherwise. Cite this article:
Grand Junction, Tennessee Facts for Kids. Kiddle Encyclopedia.