Hickory Withe is an unincorporated community in Fayette County, Tennessee, United States. For several years it functioned as an incorporated town, and was so treated at the 2000 census, at which time it had a population of 2,574.

There were 980 households out of which 26.6% had children under the age of 18 living with them, 73.1% were married couples living together, 6.7% had a female householder with no husband present, and 18.0% were non-families. 14.9% of all households were made up of individuals and 4.6% had someone living alone who was 65 years of age or older. The average household size was 2.63 and the average family size was 2.90.

The community of Hickory Withe was settled in 1834 by families who moved from the region around Prosperity, South Carolina. 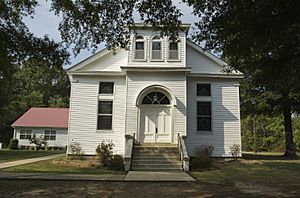 Efforts to incorporate Hickory Withe led to revisions of Tennessee laws regarding incorporation and annexation. In the mid-1990s supporters of the idea of incorporating Hickory Withe went to Lieutenant Governor John S. Wilder, who was from nearby Braden and had represented the area in the Tennessee Senate since 1966, with the idea of sponsoring a bill which would allow Hickory Withe to incorporate, something which could not be accomplished under the then-existing law. Wilder learned that he could not introduce an act allowing only for the incorporation of Hickory Withe as this would be rejected by the courts as unconstitutional, so it was necessary for any act to help Hickory Withe to incorporate to be worded in a broad enough fashion to allow any similar area in Tennessee which also desired to incorporate to do so as well. The eventual bill which passed was drawn in such a way as to allow almost any previously-unincorporated area to incorporate, and several attempted to do so, including, famously, an apartment building near Elizabethton. The resulting legislation became known, somewhat derisively, as the "Tiny Towns Bill". Most of the towns which were set up, or were attempted to be set up under the act, seemed primarily to be efforts to prevent areas from being annexed by larger jurisdictions which charged property tax. The Tennessee Supreme Court struck down the new legislation on November 19, 1997, less than a year after it entered the books. Corrective legislation enacted since has required any new town being set up to have a property tax rate set as a condition of its incorporation (and that rate cannot be "zero"). Towns set up under the "Tiny Town" law, like Hickory Withe, were not automatically dissolved with the act's repeal, although some have subsequently taken this step.

Hickory Withe is predominantly semi-rural and agricultural. The primary agricultural product cultivated in and around the community is cotton. Horse farming is also a significant agricultural land use.

The community has seen more recent residential development as a result of the eastward expansion of the Memphis urban area and the completion of the Memphis outer beltway (future I-269) in nearby eastern Shelby County.

All content from Kiddle encyclopedia articles (including the article images and facts) can be freely used under Attribution-ShareAlike license, unless stated otherwise. Cite this article:
Hickory Withe, Tennessee Facts for Kids. Kiddle Encyclopedia.