For the World War II use of the airport, see Dyersburg Army Air Base

In 2007, Arnold Field is home to 15 general purpose aircraft and the Veterans' Museum. 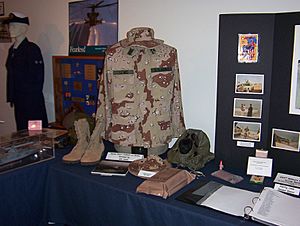 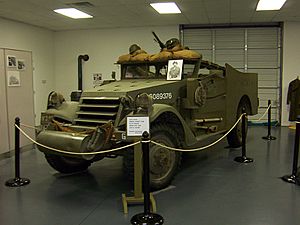 The Veterans' Museum, located on the site of the former air base, was built in 1997. It is owned and operated by The Dyersburg Army Air Base Memorial Association, a non-profit organization.

The purpose of the museum is the preservation and documentation of materials related to military activities from World War I to the Iraq war, as well as documenting the history of the air base itself.

RV parking is available at no charge and admittance to the museum is free. Electrical hookup is $10 per day.

The exhibits of the Veterans' Museum stem from donations by organizations and individuals.

Outside exhibits of the museum are an A-7 Corsair II and military vehicles.

Murals painted by Ernie Berke and photographs of 72 crews are also displayed. 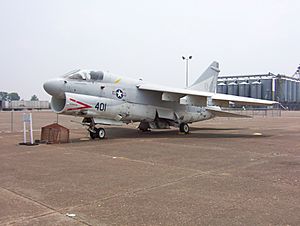 A-7 Corsair II in front of the Veterans' Museum

In irregular intervals, the museum organizes and houses air shows on Arnold Field.

The museum houses conference facilities for up to 50 people and the Sammie Arnold Lending Library, with books covering the topics documented in the museum.

All content from Kiddle encyclopedia articles (including the article images and facts) can be freely used under Attribution-ShareAlike license, unless stated otherwise. Cite this article:
Arnold Field (Tennessee) Facts for Kids. Kiddle Encyclopedia.