Brownsville is a city in Haywood County, Tennessee. It is the county seat of Haywood County, which is in the broad delta floodplain near the Mississippi River. Its population as of the 2010 census is 10,292.

The city is named after General Jacob Jennings Brown, an American officer of The War of 1812. 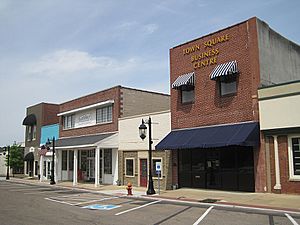 Brownsville developed in association with cotton plantations and commodity agriculture in the Mid-South. It is located near the Hatchie River, a tributary of the Mississippi River, which originally served as the main transportation routes to markets for cotton. The town is notable for its many well-preserved antebellum homes owned by wealthy planters before the Civil War, and multi-generational family-owned farms.

The Tabernacle Campground was founded in 1826 by the Rev. Howell Taylor, soon after Brownsville was founded. In the 21st century, it serves as the site of an annual "camp-meeting" for descendants of Taylor.

Brownsville's synagogue, Temple Adas Israel, was built in 1882 by German Jewish immigrants, who founded the congregation in the 1860s. It is listed on the National Register of Historic Places. The building is believed to be the oldest synagogue in Tennessee, and is a rare example of a synagogue built in the Gothic Revival style.

Through the late 19th century, whites worked to re-establish supremacy after Reconstruction and impose Jim Crow and second-class status on African Americans. Tennessee effectively disenfranchised most blacks in the state after the turn of the 20th century, excluding them from the political system. The state's congressional delegation and elected officials became predominately Democratic, except for Republicans elected by white residents in East Tennessee.

Haywood County still had a significant black majority in the late 1930s, but they had no way to exercise political power. In 1939 a number of blacks in Brownsville founded a local NAACP chapter and worked to assert their right to register and vote in the presidential election that year. In June 1940 threats were made against the group, and Elisha Davis was kidnapped by a large white mob. They demanded the names of NAACP members and their plans. He fled the town, followed by his family, losing his successful service station and all their property.

On June 20, 1940, Elbert Williams, secretary of the NAACP chapter, and Elisha's brother Thomas Davis were both questioned by police. Thomas was released, but Williams was never seen alive again. His body was found in the Hatchie River a few days later. He is considered to be the first NAACP member to have been lynched for civil rights activities. Several other members were run out of town, fearing for their lives. The NAACP conducted an investigation and appealed to the Department of Justice to prosecute Williams' murder, providing affidavits of witnesses. FBI agents were sent to the town in September to protect blacks wanting to register to vote, but they were fearful because there had been no prosecution of Williams' killers. NAACP sources said that no blacks registered to vote, as it reported in its magazine The Crisis in October 1940. Davis and his family resettled in Niles, Michigan.

In 2015 the Tennessee Historical Commission approved an official historical marker honoring Elbert Williams. It was dedicated in Brownsville on June 20, 2015, at a memorial service marking the seventy-fifth anniversary of Williams’ death. The featured speaker was NAACP President Cornell W. Brooks.

According to the United States Census Bureau, Brownsville has a total area of 9.1 square miles (24 km2), all land.

Brownsville is situated on the southeastern edge of the New Madrid Seismic Zone, an area with a high earthquake risk.

The Hatchie River runs through Brownsville. It is the longest free-flowing tributary of the lower Mississippi, and contains the largest forested floodplain in Tennessee. The river is home to hundreds of species of fish, including 11 species of catfish, and the alligator snapping turtle. The Hatchie River was named by the Nature Conservancy as one of the "great places" to save. The Hatchie is also designated as a "scenic river" under the Tennessee Wild and Scenic Rivers Act.

The climate in this area is characterized by hot, humid summers and generally mild to cool winters. According to the Köppen Climate Classification system, Brownsville has a humid subtropical climate, abbreviated "Cfa" on climate maps.

There were 4,105 households out of which 35.4% had children under the age of 18 living with them, 38.8% were married couples living together, 27.3% had a female householder with no husband present, and 30.2% were non-families. 27.0% of all households were made up of individuals and 11.8% had someone living alone who was 65 years of age or older. The average household size was 2.58 and the average family size was 3.11. 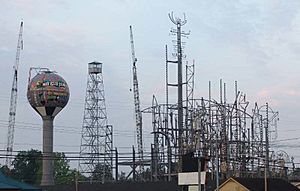 Blues singer and guitarist Sleepy John Estes was born in Ripley (Nutbush) and later moved to Brownsville in 1915.

Yank Rachell, blues artist and mandolin player, was born in Brownsville in the early 1900s. He recorded, toured Europe, Japan and shortly before his death in 1997 returned to Brownsville to perform Jug Band recordings with John Sebastian and the J-Band.

In the song "Delta Dawn" (recorded by Tanya Tucker and others), the lyric "All the folks around Brownsville say she's crazy," is a reference to Brownsville, Tennessee. Credit for the writing of the song is given to songwriter Alex Harvey and former child rockabilly star Larry Collins.

According to a 1990s interview with Zelma Bullock, mother of singer Tina Turner, her daughter was born Anna Mae Bullock in a sharecroppers' cabin in Nutbush on November 26, 1939. Her father was a farm overseer, and Anna Mae lived as a child in the Knoxville area, Nutbush, Ripley and Brownsville.

All content from Kiddle encyclopedia articles (including the article images and facts) can be freely used under Attribution-ShareAlike license, unless stated otherwise. Cite this article:
Brownsville, Tennessee Facts for Kids. Kiddle Encyclopedia.