Kids Encyclopedia Facts
Not to be confused with Benton County, Tennessee.

Benton is a town in Polk County, Tennessee, United States. The population was 1,385 at the 2010 census. It is the county seat of Polk County.

Benton is included in the Cleveland Metropolitan Statistical Area.

Benton was founded in 1840 as a county seat for Polk County, which had been established the previous year. The town, originally a trading post known as McKamy's stock stand, was named in honor of Thomas Hart Benton.

The Benton fireworks disaster was an industrial disaster which occurred on May 27, 1983 on a farm southeast of Benton. An explosion at a secret illegal fireworks operation killed eleven, injured one, caused damage within a radius of several miles, and revealed the operation. The operation was by far the largest and most successful known illegal fireworks operation and the blast, having been heard over 20 miles away, was arguably the largest and most powerful explosion involving firework explosives.

Benton is centered on the junction of U.S. Route 411, which connects the town to Etowah to the north and Tennga, Georgia to the south, and Tennessee State Route 314, which connects Benton to Parksville and the Ocoee Dam area to the southeast. Benton is located approximately 20 miles (32 km) east of Interstate 75.

According to the United States Census Bureau, the town has a total area of 2.3 square miles (6.0 km2), all land.

One of the scenic areas around Benton is Lake McCamy, where a hiking trail leads to the Benton Falls. 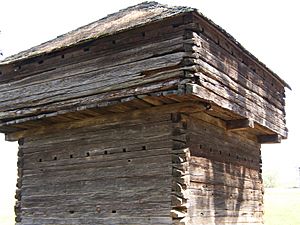 Fort Marr in Benton is the last of 23 stockades used to confine the Cherokee during the months prior to the Trail of Tears.

There were 468 households out of which 26.5% had children under the age of 18 living with them, 47.6% were married couples living together, 12.8% had a female householder with no husband present, and 35.5% were non-families. 31.8% of all households were made up of individuals and 14.5% had someone living alone who was 65 years of age or older. The average household size was 2.34 and the average family size was 2.95.

All content from Kiddle encyclopedia articles (including the article images and facts) can be freely used under Attribution-ShareAlike license, unless stated otherwise. Cite this article:
Benton, Tennessee Facts for Kids. Kiddle Encyclopedia.