Etowah is a city in McMinn County, Tennessee, United States. The population was 3,490 at the 2010 census.

Etowah was founded in 1906, primarily as a location for a depot on the Louisville & Nashville Railroad (L&N) line as part of a more direct route between Atlanta and Cincinnati. The etymology of the town name is unclear, but local folklore states that a train crew brought a sign reading "Etowah" from the Etowah River, and the name stuck. The word Etowah comes from the Muskogee/Creek word italwa meaning "town."

In 1902, the Louisville and Nashville Railroad announced its plan to build a more direct line from Atlanta to Cincinnati in order to avoid the rugged mountains of North Georgia and East Tennessee bypassing the Great Hiwassee Loop. A point midway between these cities was needed to service cars and change crews, and at the end of 1904, land had been purchased in McMinn County to serve as this site and the city of Etowah was planned. The L & N purchased 1,454 acres (5.88 km2) for the main terminus (depot), maintenance and repair facilities (shops), railroad yards and proposed township to support the railroad workforce. This land was purchased at $10 to $20 per acre and the L&N set about building a major rail center and the town of Etowah.

Out of what was referred to then as a wet swampland, a boomtown sprung up in 1906 with the L & N Depot serving as the hub of the new town's business and social activities. Since then, the City of Etowah has ridden the waves of economic downturns and successes, such as the closing of the L & N shops in the 1930s and the recruitment of new industries, to evolve into the city that it is today. Etowah has seen positive growth in industry and retail over the past decade.

In 1974, Etowah residents Doug, Carol and Michael Tullock started the Bargain Barn grocery store, which has since grown into a chain that includes 35 stores in 5 states.

On April 3, 1974, an F3 tornado struck southern Etowah, destroying 23 homes and killing 3 people. The tornado was one of many in the 1974 Super Outbreak.

According to the United States Census Bureau, the city has a total area of 2.8 square miles (7.2 km²), all of it land.

There were 1,545 households out of which 26.6% had children under the age of 18 living with them, 47.5% were married couples living together, 12.5% had a female householder with no husband present, and 36.6% were non-families. 32.8% of all households were made up of individuals and 17.2% had someone living alone who was 65 years of age or older. The average household size was 2.25 and the average family size was 2.86. 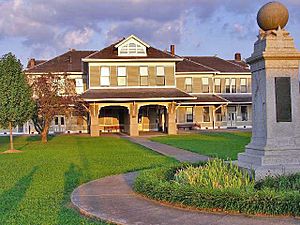 The Historic L&N Depot museum in downtown Etowah is considered by many to be the main attraction in this small town. The historically African-American "Parkstown" neighborhood on the south side of Etowah has also seen renewed interest from tourists in recent years. An obvious presence in Etowah is the Gem Theater. Located in a building originally built in 1927 and purchased by the city of Etowah in 1993 and now is the location of local plays, concerts, movies and other events.

All content from Kiddle encyclopedia articles (including the article images and facts) can be freely used under Attribution-ShareAlike license, unless stated otherwise. Cite this article:
Etowah, Tennessee Facts for Kids. Kiddle Encyclopedia.