Englewood is a town in McMinn County, Tennessee, United States. The population was 1,532 at the 2010 census.

In 1857, businessman John Dixon established the Eureka Cotton Mills near what is now Englewood, which used regionally-grown cotton to produce yarn. The small mill community that developed around the mill became known as Eureka Mills. By 1875, Elisha Brient, a partner of Dixon's, and several of Brient's relatives had acquired Eureka Cotton Mills, and in 1894 the Brients renamed the town of Eureka Mills "Englewood". The name was suggested by Nancy Chestnutt, a sister-in-law of James Brient, who thought the area resembled the English forests of the Robin Hood tales she had read about as a child. 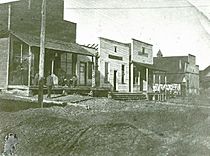 In the late 19th century, the Brients began building shops and gristmills approximately 2 miles (3.2 km) northeast of their milltown at a railroad stop called Tellico Junction, where the Atlanta, Knoxville & Northern Railroad (which roughly followed modern U.S. 411) intersected the Tellico Railroad (which connected Athens and Tellico Plains). The Brients also expanded their Englewood operation, establishing a flour and feed mill in partnership with J.W. Chestnutt. In 1907, the entire Englewood operation was moved to Tellico Junction to take advantage of the railroad. The following year, Tellico Junction was renamed Englewood. The original milltown became known as "Old Englewood". 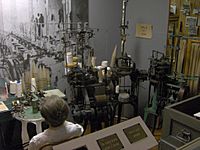 Display at the Englewood Textile Museum

During the Great Depression, the Englewood mills were forced to close, and many of the town's residents joined various federal work programs. During World War II, the Eureka Cotton Mill was refurbished by the United National Clothing Center, which made clothing for donations to wartorn countries. Several mills and factories established operations at Englewood over subsequent decades, but most had shut down by the late 1990s. The last of the Englewood mills, Allied Hosiery, closed its doors in 2008. The Englewood Textile Museum, near the corner of Niota Street and Main Street, interprets the town's manufacturing history.

According to the United States Census Bureau, the town has a total area of 1.7 square miles (4.4 km2), all land. The town is situated in the Chestuee Creek Valley, a broad valley carved by a tributary of the Hiwassee River, which passes a few miles to the southwest. The Unicoi Mountains, part of the greater Blue Ridge Range, dominate the horizon to the south. U.S. Route 411 connects Englewood to Madisonville to the northeast and Etowah to the south. Tennessee State Highway 39 (South Niota Road and West Athens Street) connects Englewood to Athens, opposite the hills to the west and as Tellico Street, connects Englewood to Tellico Plains to the east.

There were 670 households out of which 31.8% had children under the age of 18 living with them, 51.5% were married couples living together, 14.0% had a female householder with no husband present, and 31.8% were non-families. 29.9% of all households were made up of individuals and 14.9% had someone living alone who was 65 years of age or older. The average household size was 2.37 and the average family size was 2.94.

All content from Kiddle encyclopedia articles (including the article images and facts) can be freely used under Attribution-ShareAlike license, unless stated otherwise. Cite this article:
Englewood, Tennessee Facts for Kids. Kiddle Encyclopedia.