Kids Encyclopedia Facts
This page is about the city in Tennessee. For other uses, see Athens (disambiguation).

Athens is a city in McMinn County, Tennessee, United States. It is the county seat of McMinn County and the principal city of the Athens Micropolitan Statistical Area, which is part of the larger Chattanooga-Cleveland-Athens Combined Statistical Area. The population was 13,220 at the 2000 census and 13,458 at the 2010 census. 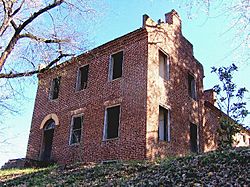 The Samuel Cleage House outside of Athens, set on the site of McElhaney and Sons Nursery, built in the 1820s

The Cherokee were living in McMinn County at the time of the arrival of the first Euro-American explorers. The Athens area was situated nearly halfway between the Overhill Cherokee villages of Great Tellico to the north in Monroe County and Great Hiwassee along the Hiwassee River to the south. In 1819, the Cherokee signed the Calhoun Treaty, selling the land north of the Hiwassee (including all of modern McMinn County) to the United States. McMinn County was organized on November 13, 1819 at the home of John Walker in what is now Calhoun. The Native American village, Pumpkintown (a corruption of Potemkin town), was located on a farm about two miles east of present-day Athens. It is sometimes incorrectly identified as a forerunner of Athens. Athens was laid out and chosen as the county seat in 1822. The name "Athens" may have been chosen due to perceived topographical similarities to Athens, Greece.

By 1834, the population of Athens had grown to over 500. Prominent early settlers included William Henry Cooke, who operated an iron forge near modern Etowah, and Samuel Clegg (or Cleage), a construction entrepreneur. Jesse Mayfield, whose descendants founded Mayfield Dairy Farms, arrived in the early 1820s. The Hiwassee Railroad received a charter in the mid-1830s to build a railroad connecting Knoxville, Tennessee and Dalton, Georgia. The railroad began construction in 1837, although financial and legal problems delayed its completion until 1851. In 1836, General John Wool arrived in Athens to help coordinate the Cherokee Removal. Although initially voluntary, the operation became a forced removal in 1838 when many Cherokee refused to leave. The removal culminated in the forced march west that became known as the Trail of Tears. Wool set up his headquarters at the Bridges Hotel, which was located across the street from the McMinn County Courthouse.

McMinn County was divided during the American Civil War. The well-established railroad brought numerous pro-secessionist and anti-secessionist speakers to the county, including Andrew Johnson, Horace Maynard, John Bell, and William "Parson" Brownlow. In 1861, McMinn County voted against secession by a narrow 1,144-904 margin. The county sent 12 units to the Union army and 8 units to the Confederate army. General William Tecumseh Sherman was briefly headquartered at the Bridges Hotel in McMinn County while preparing his "March to the Sea." 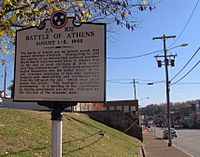 THC marker at the "Battle of Athens" site

After the Civil War, the railroad lured business opportunists to McMinn County. In 1887, several investors established the Athens Mining and Manufacturing Company with plans to convert the town into a model industrial community and initiate large-scale mining operations in the area. Textile mills, flour mills, and timber mills dominated the county's industry by the late 19th century, complemented by furniture and appliance factories in the 1920s.

In 1946, several McMinn County World War II veterans ran for local office in hopes of removing a county government deemed corrupt. On August 1, local authorities locked themselves in the county jail along with the ballot boxes. Suspecting foul play, the veterans armed themselves and assembled on a hill across the street from the jail. After an exchange of gunfire, the county authorities surrendered. The ballots were counted, and the veterans' ticket was elected, ending the Battle of Athens.

According to the United States Census Bureau, the city has a total area of 13.5 square miles (35 km2), all land.

There were 5,550 households out of which 30.0% had children under the age of 18 living with them, 47.2% were married couples living together, 14.8% had a female householder with no husband present, and 35.3% were non-families. 31.7% of all households were made up of individuals and 13.0% had someone living alone who was 65 years of age or older. The average household size was 2.29 and the average family size was 2.89.

Athens is served by one daily newspaper publication, The Daily Post Athenian as well as seven radio stations, (four FM, and three AM), and one Comcast TV channel, 95.

All content from Kiddle encyclopedia articles (including the article images and facts) can be freely used under Attribution-ShareAlike license, unless stated otherwise. Cite this article:
Athens, Tennessee Facts for Kids. Kiddle Encyclopedia.