Kids Encyclopedia Facts
Not to be confused with Oconee River or Toccoa Creek. 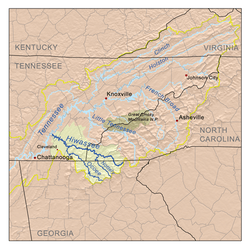 The Toccoa River and Ocoee River are the names in use for a single 93-mile-long (150 km) river that flows northwestward through the southern Appalachian Mountains of the southeastern United States. It is a tributary of the Hiwassee River, which it joins in Polk County, Tennessee, near the town of Benton. Three power generating dams are operated along it.

The river is called the Toccoa for its 56 miles (90 km) through Georgia, until it reaches the twin cities of McCaysville, Georgia and Copperhill, Tennessee, at the truss bridge which connects Georgia 5 (Blue Ridge Street) with Tennessee 68 and Georgia 60 (Ocoee Street and Toccoa Street). The remainder is called the Ocoee through Tennessee. The Ocoee is globally known for its Class III-V whitewater rapids, appealing to kayakers and rafting enthusiasts. The upper section of the Ocoee was host to whitewater slalom events during the Centennial 1996 Summer Olympics held primarily in Atlanta, about 100 miles (160 km) to the south.

On February 16, 1990 flooding of the river submerged much of the central business district of the riverfront towns of Copperhill, Tennessee and McCaysville, Georgia. The area was once heavily mined for copper ore from the Copper Basin and polluted by smelting operations. Extensive logging and plant destroying smog depleted topsoil and polluted acid and metals into the area's streams. The area has since been cleaned and greened. Olympic kayaker Joe Jacobi led a successful effort to bring the Atlanta Olympic white-water event to the Ocoee River in 1996, and his wife Lisa, a former CNN news producer, left her job to open a downtown bed-and-breakfast and become a local internet entrepreneur.

The Ocoee's flow is controlled by the Tennessee Valley Authority via three dams. Most often the riverbed is nearly dry in the ten-mile (16 km) stretch used for sporting, the water being diverted through flumes along the side of the river gorge. The dam was originally built in 1913 by the East Tennessee Power Company to provide hydroelectric power to the new Alcoa company, which was starting aluminum production operations in Blount County, Tennessee, south of Knoxville.

The three Ocoee dams are numbered sequentially, with #1 being the farthest downstream and #3 being the farthest upstream. TVA acquired the two original dams (Ocoee #1 and Ocoee #2) in 1939 and started building Ocoee #3 dam in 1940. These dams generate an average of 67,000 kilowatts of electricity in total. The Ocoee #2 dam diverts water from the middle section of the river through the flume. After a rock slide in September 1976 that damaged the flume, the TVA began a major overhaul of the flume system. During this time, the river, which had been dry during the early years of recreational whitewater sports, ran without diversion. The Ocoee gained the attention of paddlers and rafting companies who offered rafting trips to the public while the repairs were taking place. When the flume overhaul was finished, the Ocoee River Council was formed in order to secure future recreational releases from the TVA. After an extensive legal battle requiring an act of Congress, recreational releases were conceded by the TVA and the river runs most weekends from March through October. The Middle Section contains some 20 named Class III and IV rapids and provides recreational opportunities throughout its eight-month season. One of the largest rapids on the Middle Ocoee, "Hell's Hole," runs right beneath the bridge leading to the power station, with "Powerhouse", a significant ledge with a strong hydraulic, right after it. Upstream (to the southeast), TVA also operates Blue Ridge Dam, which creates Lake Blue Ridge (called Blue Ridge Reservoir by TVA). 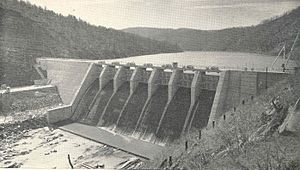 The Canoe slalom events during the 1996 Summer Olympics were conducted on a half-mile Olympic whitewater course that is fed by releases of water from Ocoee #3. The Ocoee Whitewater Center was built by the U.S. Forest Service for this purpose, including a large building along U.S. 64, whose eastbound lanes were originally built for traffic which are now converted to be used as a parking and staging area. A 4.5-mile whitewater rafting area farther downstream is fed by water released from Ocoee Dam #2. The Olympic section was not open to the public until after the Olympics, while the middle section had been open to the public since the late 1970s. After the Olympics, rafting tours (including bus transportation) are provided by several different companies located in both directions on U.S. 64, which runs next to the river for a few miles (several kilometers). These outfitters provide other activities on and along the river such as biking, hiking, kayaking and lodging. Whitewater rafting is the most popular and is led by trained river guides through a number of rapids.

Rapids on the Middle:

The river was once known as the Ocowee River and, according to the Geographic Names Information System, the Toccoa/Ocoee River has also been known as:

All content from Kiddle encyclopedia articles (including the article images and facts) can be freely used under Attribution-ShareAlike license, unless stated otherwise. Cite this article:
Toccoa/Ocoee River Facts for Kids. Kiddle Encyclopedia.