Copperhill is a city in Polk County, Tennessee, United States. The population was 354 at the 2010 census. It is included in the Cleveland Metropolitan Statistical Area.

For years, up until the 1980s, the production of copper and acid denuded the area of any greenery, although the area has now been greatly reforested, due to a multimillion-dollar effort by the successor companies to the original copper company. The copper and acid plants have been permanently closed and most of the plant infrastructure already removed and sold overseas. Much of the scrap metals from the site have been removed and sold to China. Glenn Springs Holdings has cleaned and purified all the surrounding creeks and waterways, and water quality is now back to near pristine condition according to published EPA and Tennessee Department of Environmental Conservation studies.

The town is now a tourist attraction, with near daily rail excursions from Blue Ridge, Georgia, on the Blue Ridge Scenic Railroad, and near daily rail excursions from The Gee Creek Wilderness on the Hiwassee River Railroad. Whitewater rafting on the Ocoee River also attracts many people and other outdoor activities such as Mountain Biking and Hiking are also popular in the area. The area was the host for the whitewater portion of the 1996 Summer Olympics. 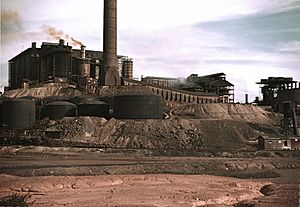 Its twin city is McCaysville, Georgia, with the two situated as a single town aligned along a northwestward-flowing river, known as the Toccoa River in Georgia, and the Ocoee River in Tennessee, rather than the east/west state line, which cuts diagonally across streets (where it is marked with a blue line) and through buildings. There is a main downtown area, which the town shares with McCaysville, and it retains a historic feel of when it was thriving. The main street through town is Ocoee Street (Tennessee State Route 68) which becomes Toccoa Street (Georgia State Route 60) to the east-southeast in McCaysville. A truss bridge over the river at the state line links them to Blue Ridge Drive (Georgia 5) to the south-southwest.

In the early morning hours of February 16, 1990, a major flood struck the towns, although it is now hard to see any damage from this flooding. The upstream Blue Ridge Dam was raised several feet by the Tennessee Valley Authority, thus greatly minimizing any potential future possible occurrence of flooding. There have been no further incidents with the river flooding.

As a result of the state line, homes and businesses on the Copperhill side of town have area code 423, while those on the McCaysville side have area code 706.

There were 239 households out of which 20.9% had children under the age of 18 living with them, 46.4% were married couples living together, 10.5% had a female householder with no husband present, and 38.5% were non-families. 34.7% of all households were made up of individuals and 18.4% had someone living alone who was 65 years of age or older. The average household size was 2.14 and the average family size was 2.73.

The climate in this area is characterized by hot, humid summers and generally mild to cool winters. According to the Köppen Climate Classification system, Copperhill has a humid subtropical climate, abbreviated "Cfa" on climate maps.

All content from Kiddle encyclopedia articles (including the article images and facts) can be freely used under Attribution-ShareAlike license, unless stated otherwise. Cite this article:
Copperhill, Tennessee Facts for Kids. Kiddle Encyclopedia.