Layne Collette Beachley AO (born 24 May 1972) is a former professional surfer from Manly, New South Wales. She won the World Championship seven times. Currently she is the chair of Surfing Australia (SA) www.surfingaustralia.com 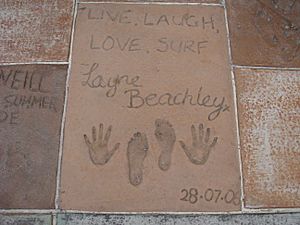 Beachley was inducted into the Surfing Hall of Fame in Huntington Beach, California.

In 2004, Layne was given a wildcard entry into the Energy Australia Open held at Newcastle, one of the rare occasions a woman has competed in a men's surfing event.

In 2006, Layne was inducted into the Surfers' Hall of Fame.

Beachley announced on 10 October 2008 that she would retire due to her age.

Beachley also voices the character "Surfer" in the episode called "The Beach" of Australian Children's Cartoon Bluey on the ABC Network. 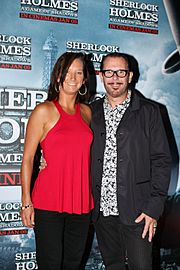 Beachley and her husband Kirk Pengilly at the Sydney premiere of Sherlock Holmes: A Game of Shadows, 2011.

Layne Beachley was born Tania Maris Gardner on 24 May 1972 in Sydney. Her mother was only 17 years old and unmarried so she was soon adopted by Neil and Valerie Beachley, who lived in nearby Manly.

When Layne was only six years old, Valerie suffered a post-operative brain hemorrhage and died, leaving Layne and her brother to be raised by Neil.

Beachley was brought up in the competitive Manly surfing scene and was competing and winning against men at the age of 15. It is thought that this is where she developed her strength and style that made her an unbeaten world champion and big wave rider. Beachley was always available when possible for any worthwhile cause in the community, whether it was for sewage outfall protests or promoting the sport and charities to which she is close.

She married Kirk Pengilly, a member of the Australian rock group INXS, in October 2010. They renewed their wedding vows in 2014 after Layne lost her wedding ring whilst surfing. Layne first met Kirk in 2002.

Beachley received the Laureus World Alternative Sportsperson of the Year Award in 2004 and was named the Extreme Female Athlete of the Year as part of the Teen Choice Awards in 2005. She was inducted into both the Australian and US surfing halls of fame in 2006, and the Sport Australia Hall of Fame in 2011. In 2006, she was also inducted into the Surfing Walk of Fame as that year's Woman of the Year; the Walk is in Huntington Beach, California.

At the 2015 Australia Day Honours, Beachley was appointed an Officer of the Order of Australia for distinguished service to the community through support for a range of charitable organisations, as a mentor for women in sport, and to surfing as a world champion competitor. She was also awarded the Australian Sports Medal in 2000 for her back to back world titles in 1998 and 1999.

All content from Kiddle encyclopedia articles (including the article images and facts) can be freely used under Attribution-ShareAlike license, unless stated otherwise. Cite this article:
Layne Beachley Facts for Kids. Kiddle Encyclopedia.