The school was founded as Rudd's College in 1902 at Clayfield by A.W. Rudd. In 1918 it was taken over by the Presbyterian and Methodist Schools Association and renamed Brisbane Boys' College.

The main three-storeyed masonry school building, was built in 1930 at Toowong, on land donated by the daughters of Sir Robert Philp. Opened in 1931, the school with its boarding facilities was contained in one building. The building was designed by architects Atkinson and Conrad, who were also responsible for the design of The Southport School c. 1924-1928, and the Church of England Grammar School at East Brisbane 1917–1930.

Another storey was added to the main tower by 1950. The verandahs of the main building were enclosed to provide further accommodation but were opened again in 1989.

The headmaster's residence was built in 1936. It also was designed by Atkinson & Conrad. The school has continued to grow and now consists of numerous other buildings with an enrolment of over 1000 students. 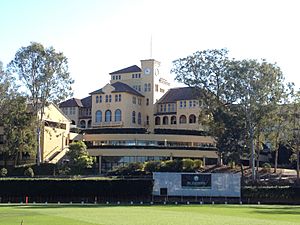 Main Building rises above the other buildings when viewed from Moggill Road, 2014 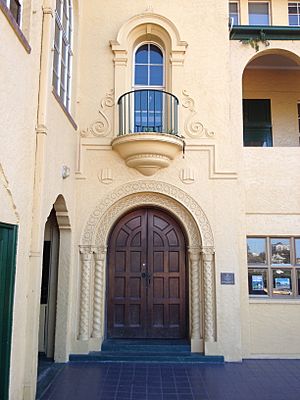 Door to the tower with the round balconette above, 2014

Seen from Moggill Road, the building rises above surrounding vegetation and roofs, being the most prominent building on the hillside. From within the school grounds, it dominates views up the hill from the north to the east, the campanile in particular being consistently visible. The neighbouring school buildings have been limited in height, preserving the vistas to and from the building.

The main entrance to the school is located on the northern frontage, which is two storeyed and divided into five bays. The central bay is gabled and features the main entrance doorway; the doorway is arched and set in a decorated rectangular frame. The two bays which flank the central entrance bays are arcaded with verandahs above, while the two outer bays have paired arched windows and tiled awnings.

The southern frontage, which overlooks the hillside, is three-storeyed, and also has five bays. The central bay, containing the chapel, extends out from the building, and has a hipped roof, with a small gable to the south. The tower behind rises another two storeys above the chapel, and has a pyramid roof. The flat-roofed campanile rises above the tower, and has an entrance at its base with a small round balconette above. The chapel has large arched windows with smaller arched windows above. The bays flanking the chapel and campanile are arcaded up to the second storey.

Decorative features to both frontages include gargoyles, twisted columns between arched windows and to principal doorways, and arched cornices to gables, the tower and the campanile. A three-storeyed annex extends to the north-east, sitting a half a storey below the rest of the building; it has a hipped roof, rectangular windows, tiled awnings to the south and a timber porch to the north.

Brisbane Boys' College Buildings were listed on the Queensland Heritage Register on 21 October 1992 having satisfied the following criteria.

Brisbane Boys' College, Toowong, is significant historically for its association with the work of the Presbyterian and Methodist Churches in the provision of education for boys in Queensland since 1918.

The main building demonstrates the principal characteristics of a substantial school building in the interwar Spanish Mission style, and the Headmaster's Residence is a good example of an interwar rendered masonry house.

The place is important for its aesthetic values, in particular the accomplished design in the composition of forms and detailing of the main building, which is also a prominent local landmark.

The place has social significance as the alma mater of the sons of thousands of Protestant families in Queensland.

The main building and headmaster's residence are significant examples of the work of Brisbane architects Atkinson and Conrad, who designed a number of substantial private school buildings in Queensland during the interwar period.

All content from Kiddle encyclopedia articles (including the article images and facts) can be freely used under Attribution-ShareAlike license, unless stated otherwise. Cite this article:
Brisbane Boys' College Buildings Facts for Kids. Kiddle Encyclopedia.