Highgate Hill is a suburb of inner Brisbane, Queensland, Australia 2 kilometres (1.2 mi) south of the Brisbane CBD on the Brisbane River. The topography of the suburb is undulating hills no more than 70 metres (230 ft) above sea level.

Highgate Hill is a high-density suburb with many apartment buildings, some more than 10 storeys. These apartment blocks are centered along the main road of Dornoch Terrace, a trend that was started in 1960 by the landmark Torbreck building. Proximity to and views of the Brisbane central business district have drawn residents to the area. 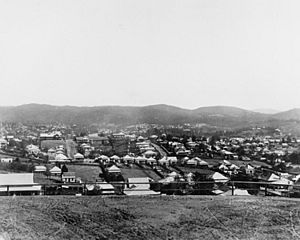 On the eastern side of the suburb Gloucester Street railway station once provided better rail access. The station was removed in 1978, with little indication of its existence remaining.

Highgate Hill has a number of heritage-listed sites, including:

All content from Kiddle encyclopedia articles (including the article images and facts) can be freely used under Attribution-ShareAlike license, unless stated otherwise. Cite this article:
Highgate Hill, Queensland Facts for Kids. Kiddle Encyclopedia.