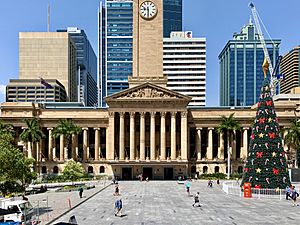 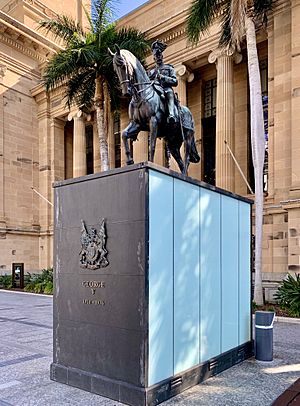 Statue of King George V, after whom the square was named. The statue is in King George Square, in front of Brisbane City Hall. 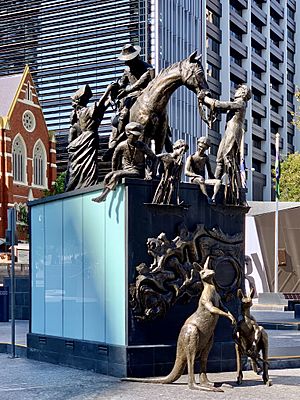 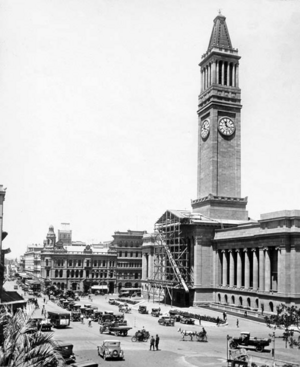 King George Square in 1930, when it was called Albert Square

King George Square is a public square located between Adelaide Street and Ann Street (and between two sections of Albert Street) in Brisbane, Queensland, Australia. Brisbane City Hall is adjacent to the square.

Following the death of King George V in 1936, the square was widened to include the area which had been Albert Street, and renamed King George Square in honour of the King. The bronze Lion sculptures, which "guard" the King George Square entrance to the Brisbane City Hall, were initially on large sandstone plinths, as part of the George V memorial, which was unveiled in 1938, as a tribute to the King from the citizens of Brisbane.

Vehicular traffic, including a trolley-bus route, operated through the square until 1969, when the roadway was closed to traffic. Buildings on the northern side of the square were acquired by the City Council including the Tivoli Theatre and the Hibernian Building and demolished and work commenced on the construction of the underground King George Square Car Park. At the time of the construction, the statues, including that of King George V and the brass lions, were relocated to their present positions in the square and, between the statues and King George Square, there is now a narrow laneway (replacing the former roadway) for the infrequent passage of Government vehicles (or work vehicles) to be driven to the front of the City Hall.

There are statues of some famous Queenslanders in a special section of King George Square, which is called "Speakers' Corner". The statues are of Steele Rudd (1868–1935), Emma Miller (1839–1917), and Sir Charles Lilley (1830–1897). Bronze sculptures from the Expo '88 site have also been incorporated into the square's design. 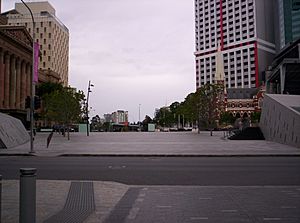 The redesign has been heavily criticized for excess surface heat, glare and its lack of shade.

The National Library of Australia holds photographs of Albert Square, which pre-date King George Square in its present form.

All content from Kiddle encyclopedia articles (including the article images and facts) can be freely used under Attribution-ShareAlike license, unless stated otherwise. Cite this article:
King George Square Facts for Kids. Kiddle Encyclopedia.