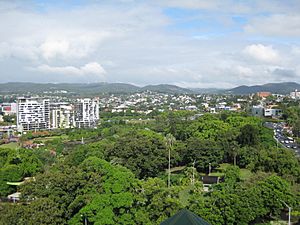 The Roma Street Parkland viewed from the nearby Hotel Grand Chancellor

There is also a car park area, with road access from the intersection between Wickham Terrace, College Road and Gregory Terrace. Roma Street Parkland is the world's largest subtropical garden in a city centre. The parkland features a variety of themed gardens and recreational areas, with a web of pathways and boardwalks traversing cascading waterways and rocky outcrops, and also in situ artworks by 16 local artists.

The terminal grew to become a major goods yard for Brisbane and, between 1911 and 1934, the area was extensively redeveloped to support its increase in services. In 1920 extensive excavation, removing 554,300 cubic meters of earth, permanently altered the steep terrain creating the current day artificial escarpment and the boundary of the former Albert Park. During World War II, the terminal was vital for transporting war materials and military personnel north.

Continuing to grow, the Roma Street railway station was redeveloped to service a metropolitan and long-distance train network. Because of limitations of the site revealed through the increasing mechanization of freight handling and the use of containers, the facility was eventually relocated to Acacia Ridge in 1991.

In February 1995, State Premier Wayne Goss announced the railway goods yard would be redeveloped as parkland. Construction began in 2000 with the parkland opened to the public in 2001. The project won its first award before it had opened: a commendation in the Cement and Concrete Association of Australia Streetsmart awards for the innovative concrete finishes created by the use of coloured concrete and an apparently random pattern of rough cast concrete generated by the formworkers which makes the finish appear to change through the day depending on the angle of the sun and the length of shadows cast by the detailing on the walls. The technique was created through a design and construction collaboration between project designers PARC managing contractor Abigroup and the Queensland Department of Public Works. 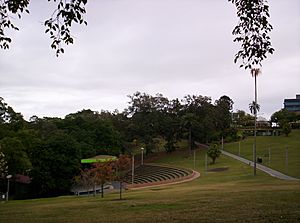 Other theatre productions, including orchestral concerts, have also been performed there. One such concert, in which the music was by Johann Strauss, was called "Strauss Beneath the Stars", which was presented in October 1983.

The Lord Mayor's Christmas Carols, Brisbane's Carols by Candlelight concerts, were held at the Albert Park Amphitheatre before Riverstage was built in the City Botanic Gardens.

All content from Kiddle encyclopedia articles (including the article images and facts) can be freely used under Attribution-ShareAlike license, unless stated otherwise. Cite this article:
Roma Street Parkland Facts for Kids. Kiddle Encyclopedia.