The City Botanic Gardens (formerly the Brisbane Botanic Gardens) is a heritage-listed botanic garden on Alice Street, Brisbane City, City of Brisbane, Queensland, Australia. It was also known as Queen's Park. It is located on Gardens Point in the Brisbane CBD and is bordered by the Brisbane River, Alice Street, George Street, Parliament House and Queensland University of Technology's Gardens Point campus. It was established in 1825 as a farm for the Moreton Bay penal settlement.

The Gardens include Brisbane's most mature gardens, with many rare and unusual botanic species. In particular the Gardens feature a special collection of cycads, palms, figs and bamboo.

The City Botanic Gardens was added to the Queensland Heritage Register on 3 February 1997. The Queensland Heritage Register describes the Gardens as "the most significant, non-Aboriginal cultural landscape in Queensland, having a continuous horticultural history since 1828, without any significant loss of land area or change in use over that time. It remains the premier public park and recreational facility for the capital of Queensland, which role it has performed since the early 1840s."

Much of the present-day Botanic Gardens was surveyed and selected as the site for a public garden in 1828 by the NSW Colonial Botanist Charles Fraser, three years after the establishment of the Moreton Bay penal settlement at nearby North Quay, Brisbane. Originally the gardens were planted by convicts in 1825 with food crops to feed the prison colony.

In 1855 a portion of several acres was declared a Botanic Reserve. In the same year Walter Hill was appointed as curator of the Botanic Reserve, a position he held until 1881. He began an active planting and experimental program. Some of the older trees planted in the Gardens were the first of their species to be planted in Australia, due to Hill's experiments to acclimatise plants. The experiments served practical outcomes. Plants with potential commercial value were tested in the gardens, first to see if they were viable, to determine what they needed for growth and if a profit could be made. Hill introduced mango, pawpaw, ginger, tamarind, mahogany, poinciana and jacaranda trees as well as tobacco, sugar, grape vines, wheat, tropical fruits, tea, coffee, spices and textile plants. He encouraged the work of the sugar pioneer John Buhot which culminated in the first production of granulated sugar in Queensland in April 1862. A cairn was erected at the site where the sugar cane was grown. Hill also supported the work of the Queensland Acclimatisation Society which was formed in 1862, and the Botanic Gardens was the propagation and distribution point for the Society's imports. 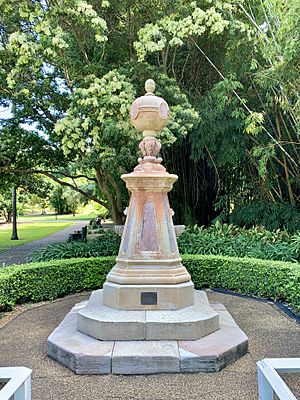 By 1866 Hill had succeeded in having the extent of the Botanic Gardens enlarged to approximately 27 acres (11 ha). A 10-acre (4.0 ha) strip along Alice Street was not part of the Gardens but served as a park and sporting field known as Queen's Park. Early building work in the area included a Superintendent's cottage in the late 1850s, a platform for a battery of cannon in the early 1860s, a stone and iron fence around Queen's Park in 1865–66 [utilising stone from the old gaol on Petrie Terrace], and a drinking fountain in 1867. The fountain, designed by Colonial Architect Charles Tiffin, was erected only a year after reticulated water from the Enoggera reservoir was introduced to Brisbane. It later became known as the Walter Hill fountain.

A row of figs were planted in the 1870s. Hill also planted avenues of Bunya pines and Cook pines. 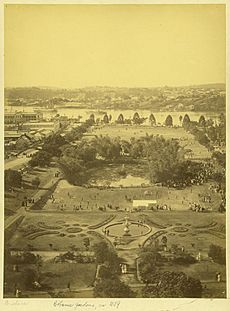 Scientific activity was complemented by public recreational use of the Gardens, along with the Domain (on the southern boundary of the Gardens) and Queen's Park. By the 1880s, some of the scientific work previously performed by the Botanic Gardens was being carried out by the Queensland Acclimatisation Society at Bowen Park. The Herbarium and Botanic Library were moved from the Gardens for a period but were returned in 1905 when John Frederick Bailey was appointed Curator of the Botanic Gardens.

Underground electricity supply was installed in 1907.

The extant City Botanic Gardens was formed by the amalgamation of the original Botanic Gardens with the Domain (the southern side of Gardens Point) and Queen's Park in 1916, bringing its total area to around 20 hectares (49 acres); Queen's Park comprised a 10-acre (4.0 ha) strip along Alice Street, which originally served as a park and a sporting field, where regular cricket and football matches were held. The former curator's cottage built for John Frederick Bailey, curator from 1905–1917, is now a cafe.

The City of Brisbane Act of 1924 transferred responsibility for the Botanic Gardens to the Brisbane City Council, but the Herbarium remained as part of the Queensland Department of Agriculture and Stock.

Due to the proximity to the river, the Botanic Gardens have been flooded nine times between 1870–2011. With many plants being washed away, the Brisbane City Council established a new botanic gardens at Mount Coot-tha. Since the opening of the Mount Coot-tha Botanic Gardens in the mid 1970s, the Brisbane Botanic Gardens has become principally a recreational venue. Re-development of the Gardens in the late 1980s saw the introduction of new recreational structures and restoration work on the former Queen's Park fence.

The Gardens were also the home for over 100 years for Harriet, a tortoise reportedly collected by Charles Darwin during his visit to the Galápagos Islands in 1835 and donated to the Gardens in 1860 by John Clements Wickham, former commander of HMS Beagle and later Government Resident for Moreton Bay. Harriet was named in honour of Harry Oakman, curator of the Gardens from 1945 to 1962 and the creator of the (now disbanded) zoo at the Gardens. The zoo closed in 1952. Harriet lived out her final years at Australia Zoo until dying in June 2006. 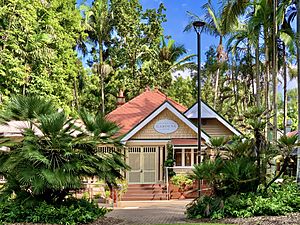 The Brisbane Botanic Gardens, occupying 20 hectares (49 acres), is bounded by George and Alice Streets and the Brisbane river. They comprise three major sections: the former Queen's Park along Alice Street, the Botanic Gardens proper (adjacent to the river), and the former Government Domain at the rear of the Queensland University of Technology (formerly part of the grounds to Old Government House).

Set in undulating grounds, the gardens are bordered by mature shade trees which also create avenues and groves. A lake and formal lawns, gardens and structures provide a diversity of passive recreational activities. A series of interconnecting paths link a riverside concourse with other perimeter paths. 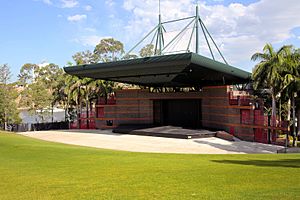 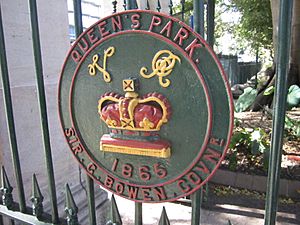 A low stone wall (1860s) surmounted by an iron railing fence runs the length of Alice Street and extends into George Street. Large iron gates provide entry at George, Albert and Edward Streets. A cottage c. 1900s, with Arts and Crafts decorative elements, is located at the southern end of the gardens on a hill known as Residence Hill. This building is surrounded by trees and shrubs, some of which are survivors of late 1850s and early 1860s plantings. The City Gardens Cafe operated from the house for many years; in 2016 it is operated as The Garden Club.

In a hollow to the north of Residence Hill, is the Walter Hill fountain. It stands on a stepped octagonal base of three tiers. The body of the fountain continues this shape but tapers towards its top. The lion shaped drinking fountains, presently not functioning, and basins are of white marble in contrast with the freestone of the rest of the structure.

To the south of Residence Hill is a 1980s grassed amphitheatre known as Riverstage facing a stage beside the river. Other structures for public convenience and recreational use are dispersed throughout the gardens. 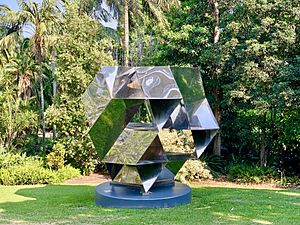 The Gardens are accessible by Alice Street, the Goodwill Bridge and Brisbane City Council's ferries and CityCats at the Gardens Point and Eagle St wharves. The gardens are open 24 hours, with pathways lit at night. 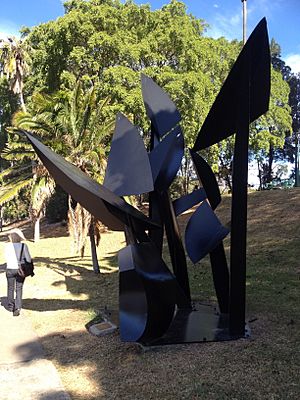 Features of the Gardens include:

Brisbane Botanic Gardens was listed on the Queensland Heritage Register on 3 February 1997 having satisfied the following criteria.

The Brisbane Botanic Gardens are historically important as the most significant, non-Aboriginal cultural landscape in Queensland, having a continuous horticultural history since 1828, without any significant loss of land area or change in use over that time. It remains the premier public park and recreational facility for the capital of Queensland, which role it has performed since the early 1840s.

Plant collections date to the 1850s, many having been planted by Walter Hill, the first Director of the Botanic Gardens. Many of the specimens are either rare in cultivation or of great maturity or both. Many important plant introductions to Queensland, of both an agricultural and ornamental nature, can be traced directly to the Brisbane Botanic Gardens and the work of its early curators.

These gardens are important in demonstrating the principal characteristics of an evolving public and botanical garden dating from the mid-19th century, containing the most extensive mature gardens in Queensland. There are a number of historic structures in the gardens, including the Walter Hill Drinking Fountain (1867), the former band pavilion (1878), the boundary stone walls, gates and cast iron railings (1865–85), the former bear pit shelter (1905), the former curator's residence (1909) [now the kiosk], the riverwall from Edward Street to the Domain (1918), the southern stone staircase on the riverbank (1918–19) and the middle and northern stone staircases (both 1923–24). The place also contains a number of historically significant early engineering projects, including the stormwater drainage system (1865 onwards), reticulated water supply from Enoggera Dam (1867) and underground electricity supply for lighting purposes (1907).

The Brisbane Botanic Gardens are significant as a Brisbane landmark and for their visual amenity and natural wildlife values as the major verdant landscaped area in the city's central business district.

Many important social events have taken place within the gardens, and the place is generally held in high regard by the local community and is a popular destination for visitors to Brisbane.

All content from Kiddle encyclopedia articles (including the article images and facts) can be freely used under Attribution-ShareAlike license, unless stated otherwise. Cite this article:
City Botanic Gardens Facts for Kids. Kiddle Encyclopedia.