Juvenile specimens of this species from Moa Island in Torres Strait have been described as a separate species, Pteropus banakrisi. This supposed species was known as the "Torresian flying fox" or "Moa Island fruit bat".

The black flying fox has short, black hair with a contrasting reddish-brown mantle, and a mean forearm length of 164 mm (6.46 in) and a mean weight of 710 g (1.57 lb). It is one of the largest bat species in the world, and has a wingspan of more than 1 m.

During the day, individuals reside in large roosts (colonies or 'camps') consisting of hundreds to tens of thousands of individuals. They sometimes share their roosts with the grey-headed flying fox (Pteropus poliocephalus), the spectacled flying fox (P. conspicillatus), and/or the little red flying fox (P. scapulatus). They roost in mangroves, paperbark swamps, patches of rainforest and bamboo forests, and very rarely in caves or underneath overhangs.

Black flying foxes breed once a year. A single young is born and carried by its mother for the first month of life, after which it is left behind in the roost when the mother is out foraging at night. 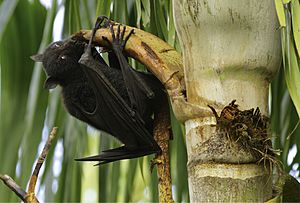 Black flying foxes eat pollen and nectar from native eucalyptus, lilypillies, paperbark, and turpentine trees. When native foods are scarce, particularly during drought, the bats may take introduced or commercial fruits, such as mangos and apples. This species had been known to travel up to 50 km (31 mi) a night in search of food. In residential areas, the species has adapted to eating introduced cocos palm trees as a substitute for scarcer native species - and now accounts for around 30% of the animals' food source. However, the high acidity of the palm fruits can prove toxic and may lead to death. 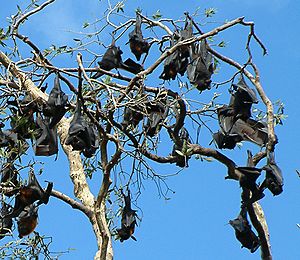 The black flying fox is not listed as threatened on the IUCN Red List; nevertheless, the species is exposed to several threats, including loss of foraging and roosting habitat, and mass die-offs caused by extreme temperature events. When present in urban environments, black flying foxes are sometimes perceived as a nuisance. Because their roosting and foraging habits bring the species into conflict with humans, it suffers from direct killing of animals in orchards and harassment and destruction of roosts. In Indonesia, this species is frequently consumed as bushmeat, with concerns that the population loss might not be sustainable.

As a disease vector

Flying foxes often come to the attention of Australian wildlife care and rescue organisations, such as Wildcare Australia, Orphan Native Animal Rear and Release Association Incorporated, Wildlife Carers Darling Downs, Bat Care, Bat Rescue, Tweed Valley Wildlife Carers, and WIRES when reported as injured, sick, orphaned or abandoned. A very high proportion of adult flying fox injuries are caused by entanglement in barbed wire fences or loose, improperly erected fruit tree netting, both of which can result in very serious injuries and a slow, agonizing death for the animal if not rescued quickly.

All content from Kiddle encyclopedia articles (including the article images and facts) can be freely used under Attribution-ShareAlike license, unless stated otherwise. Cite this article:
Black flying fox Facts for Kids. Kiddle Encyclopedia.