Brisbane Square is a high-rise building in Brisbane, Queensland, Australia. The building has 38 floors and rises to 151 metres. The building's main use is for office space, the lower floors leased to retailers, with a 350-space car park below the building. Significant tenants include the Brisbane City Council (floors 1-23) and Suncorp (floors 24-37). 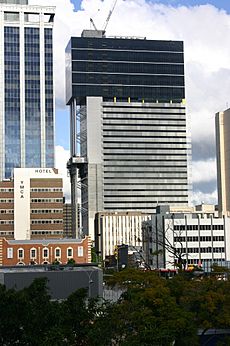 Brisbane Square under construction in 2006

Brisbane Square is owned by ABN AMRO and was designed by international architects Denton Corker Marshall. The Civil and Structural engineers for the project were Qantec McWilliam consulting engineers. Two of the four distinctive, rectangular, coloured spaces near the base of the building contain the new Brisbane City Council and Brisbane Square Library. Brisbane Square is the largest commercial office building in Australia to have been awarded a 5 star Green Star rating. The original development application included a number of residential floors on the top of the building, however this was rejected on the basis that noise levels would be excessive.

Construction was completed in late 2006. The project was constructed by Baulderstone Hornibrook. 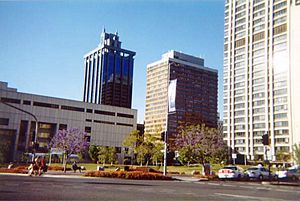 The garden park area, in front of the Law Courts Complex (and the State Law Building), is the block of land on which Brisbane Square now stands

All content from Kiddle encyclopedia articles (including the article images and facts) can be freely used under Attribution-ShareAlike license, unless stated otherwise. Cite this article:
Brisbane Square Facts for Kids. Kiddle Encyclopedia.