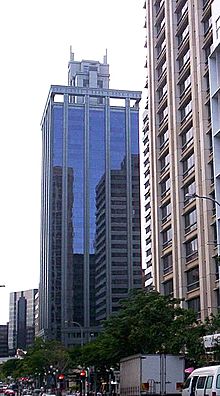 The State Law Building, at 50 Ann Street, Brisbane, Queensland, Australia, contains offices of the Attorney-General of Queensland and other government organisations.

It was originally completed in 1977 as Comalco House and featured aluminium external cladding (as Comalco was an aluminium manufacturer). It was refurbished in 1993 when the aluminium cladding was removed. Both the original building and the refurbishment was designed by local firm Conrad Gargett & Partners.

Following its complete refurbishment in 1995, the State Law Building became an iconic feature of the city, widely referred to by locals and the media as "Gotham City", "Gotham Tower" or the "Batman Building", for its perceived resemblance to the architectural style of the fictional American city appearing in American comic books published by DC Comics.

Photos of the State Law Building

All content from Kiddle encyclopedia articles (including the article images and facts) can be freely used under Attribution-ShareAlike license, unless stated otherwise. Cite this article:
State Law Building Facts for Kids. Kiddle Encyclopedia.