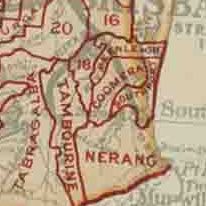 Map of the Coomera Division, March 1902

Coomera is a town and suburb in the City of Gold Coast, Queensland, Australia. In the 2016 census, Coomera had a population of 13,305 people.

Located next to the Pacific Motorway, Coomera is close to Pimpama, Hope Island, Willow Vale, Wongawallan, Oxenford, and east of Upper Coomera. The southern boundary of Coomera is aligned with the Coomera River. 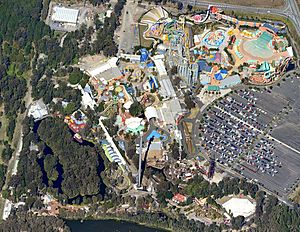 Coomera has long been earmarked as a new satellite growth suburb, similar in many ways to Robina. With Australia's biggest and most popular theme park, Dreamworld and location of the Big Brother Australia house, and plans for a TAFE, a university campus and Queensland's biggest shopping centre around the existing station, Coomera has been predicted to grow considerably beyond its present size.

Coomera has seen significant residential development including Coomera Waters which is a masterplanned community encompassing a 2,500 lot harbour, canal and dry land estate over 375 hectares of land located on the northern side of the north arm of the Coomera River, directly opposite Sanctuary Cove on Hope Island.

Current real estate developments under construction or in the pipeline for the Coomera district at the beginning of 2011 have increased year on year by $400 million to total $5.9 billion.

A number of well-known sporting teams represent the local area, including the Coomera Cutters is the local rugby league club who play home games at Coomera Sports Park and the Coomera Colts Soccer Club and Coomera Magpies Australian Football Club.

The Coomera Sport and Leisure Centre, one of the Venues of the 2018 Commonwealth Games.

St Joseph's College is a Catholic primary and secondary school (Prep to Year 12).

Foxwell State Secondary College is a government secondary school, which opened in 2020.

All content from Kiddle encyclopedia articles (including the article images and facts) can be freely used under Attribution-ShareAlike license, unless stated otherwise. Cite this article:
Coomera, Queensland Facts for Kids. Kiddle Encyclopedia.