Steiglitz is a rural coastal town and locality in the City of Gold Coast, Queensland, Australia. In the 2016 census the locality of Steiglitz had a population of 705 people.

Steiglitz is bounded to the east by Moreton Bay, to the south by Jacobs Well, to the west and north by Woongoolba.

The village in Steiglitz is located at Cabbage Tree Point and is often referred to by that name. The name refers to the cabbage tree palms that grew in the area. 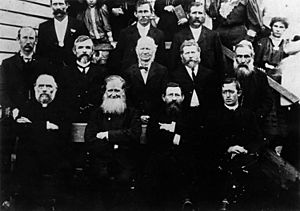 The district is named after Stegelitz, Germany, the home town of the pioneer family Kleingschmidt. 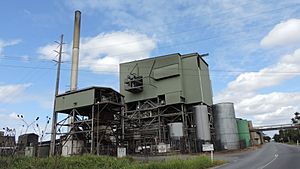 The Rocky Point Sugar Mill was established by Carl Heinrich Heck in 1878 on Mill Road (and crosses the boundary between Woongoolba and Steiglitz). Despite being one of the oldest sugar mills in Australia, it is still privately owned by the Heck Group. There were once other sugar mills in the area, but they have now closed and Rocky Point has expanded to replace their lost capacity.

All content from Kiddle encyclopedia articles (including the article images and facts) can be freely used under Attribution-ShareAlike license, unless stated otherwise. Cite this article:
Steiglitz, Queensland Facts for Kids. Kiddle Encyclopedia.