Jacobs Well is a suburb of the City of Gold Coast, Queensland, Australia. The suburb is positioned on the delta of the Pimpama River at the southern end of Moreton Bay. At the 2011 Australian Census the suburb recorded a population of 1,546.
Jacobs Well is best known for its four lane boat ramp, Volunteer Marine Rescue facility and the surrounding sugar cane fields. It is often described as "The Gateway to Southern Moreton Bay"

Jacobs Well was once part of the Shire of Albert. It belongs to the Electoral district of Coomera state electorate.

Jacobs Well is bounded to the north by Steiglitz, to the east by Moreton Bay, to the south by the Pimpama River and to the west by Norwell. 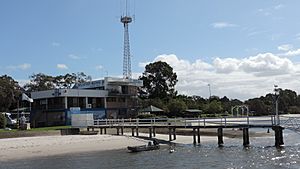 Calypso Bay is a canal estate at the south end of Jacobs Well. Established via the use of a converted sand mining lease, the surrounding mangrove tidal land was turned into a canal estate by using sand from the creation of the canals. The area remains surrounded by a largely pristine natural environment, providing a habitat for native birds and wildlife & and continues to be an important marine sanctuary. Calypso Bay offers range of waterfront homesites with direct boating access to The Broadwater and Moreton Bay. The GFC slowed the development of the site, with stages of land release ongoing. A promised golf course is still in the planning stage. The marina is operational, though not developed to its final stage yet. An Irish themed family pub, Harrigan's Drift Inn, offers great food, entertainment and caters for weddings and functions.

All content from Kiddle encyclopedia articles (including the article images and facts) can be freely used under Attribution-ShareAlike license, unless stated otherwise. Cite this article:
Jacobs Well, Queensland Facts for Kids. Kiddle Encyclopedia.