Norwell is a rural locality in the City of Gold Coast, Queensland, Australia. In the 2016 census, Norwell had a population of 200 people.

Norwell is bounded to the east by Jacobs Well, to the south by Pimpama, to the west by Ormeau, and to the north by Gilberton and Woongoolba. 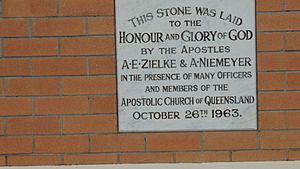 Norwell was named after the Norwell sugar plantation which was owned by William Pidd in the 1870s. 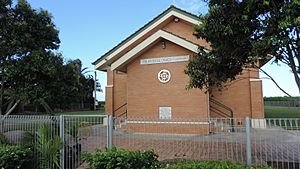 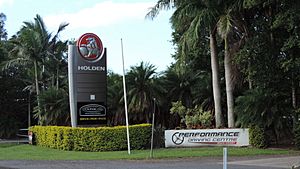 Entrance to the Holden Driving Centre, 2014

Today, the only public building in the district is the Apostolic church, which was built in 1963.

Holden operate a driver training facility at Norwell. In addition to driver safety programs at a number of levels of experience, the centre also offers 4WD training and performance driving courses and "hot laps" in a high-performance car. It is also the base for Paul Morris Motorsport and MARC Cars Australia.

All content from Kiddle encyclopedia articles (including the article images and facts) can be freely used under Attribution-ShareAlike license, unless stated otherwise. Cite this article:
Norwell, Queensland Facts for Kids. Kiddle Encyclopedia.