The Southport Broadwater Parklands is a large community park located in Southport. It is designed for large community gatherings and families. The park has many different areas for children and barbecue areas for families. The park went through a major redevelopment and was re-opened by the Premier of Queensland, Anna Bligh, on 23 August 2009. Southport Broadwater Parklands has become a popular family attraction.

The public park is accessible by several forms of public transport. The most convenient form of transport is the G:link. This is a light rail line operating from Broadbeach South to Gold Coast University Hospital via Surfers Paradise and Southport. There is a G:link station located just a few hundreds meters from the entrance to the parkland. Trams run every 8 minutes during peak times. Southport Bus Station is only a few minutes' walk from the entrance to the park and provides bus connections to neighboring suburbs. 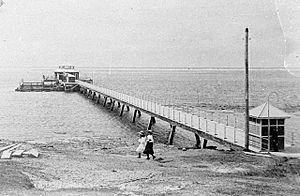 The Southport Broadwater Parklands was first declared a public space in November 1928. At the time the area featured a pier and a series of enclosed public baths. Over several years the original pier deteriorated and was eventually removed. In the 1960s the Southport Pool was constructed.

In 2005 and 2006, the Queensland Government and the Gold Coast City Council began background consultation for the redevelopment of the parklands. By late 2006 a draft master plan was developed. Throughout July and August 2007 community consultation was held on the plan. From August to November 2007 design development took place by EDAW. After some discussions with key stakeholders in October 2007, the final master plan was released in December. The contractor, Abigroup, was appointed shortly after. Construction of stage 1 began in March 2008. After close to one and a half years' construction, the Southport Broadwater Parklands opened on 23 August 2009. Construction of stage 2 began shortly after the opening of stage 1 and was completed by the end of 2010. 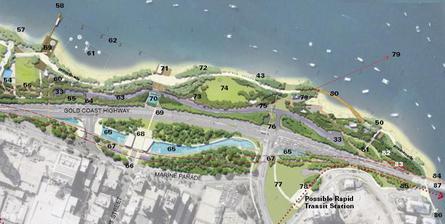 The Queensland Government and Gold Coast City Council invested over $42 million on stage 1 of the redevelopment of the Southport Broadwater Parklands. The main objectives of the design were to:

As of November 2011[update] only two stages have been constructed and opened; however, additional development was proposed in the master plan.

Construction of stage 1 began in March 2008. After close to one and a half years' construction, the Southport Broadwater Parklands opened on 23 August 2009. It included: 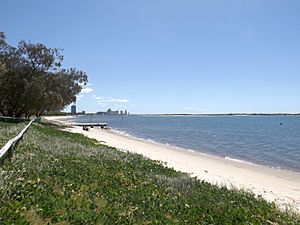 Construction of stage 2 began shortly after the opening of stage 1 and was completed by the end of 2010. It included:

The final master plan detailed a number of other developments that have yet to take place. These include:

All content from Kiddle encyclopedia articles (including the article images and facts) can be freely used under Attribution-ShareAlike license, unless stated otherwise. Cite this article:
Southport Broadwater Parklands Facts for Kids. Kiddle Encyclopedia.