Broadbeach is a suburb in the City of Gold Coast, Queensland, Australia. In the 2016 census Broadbeach had a population of 5,514 people. 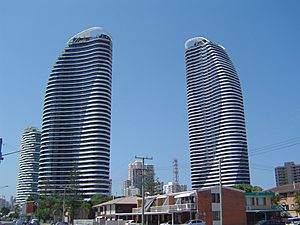 The area is also home to the Jupiters Hotel and Casino, the Gold Coast Convention and Exhibition Centre and the Oasis Shopping Centre. Broadbeach Alliance manage the precinct and present annual events and festivals such as Blues on Broadbeach Music Festival and the Broadbeach Jazz Festival. In the adjacent suburb of Broadbeach Waters is the Pacific Fair Shopping Centre.

Well known apartment blocks include Sofitel Gold Coast, The Wave, The Oracle, Beach Haven, Niecon Plaza, the Hi-Ho Motel, Belle Maison, Bel Air and Air on Broadbeach. While residential housing lots were selling successfully in the state government developed Broadbeach township from 1934, and the area had good bitumen roads that were described as 'speedways' in newspaper reports, it wasn't until the construction of Lennon's Broadbeach Hotel (now the site of the Oasis Hotel and Shopping Centre) in 1955 - 1956 that development of the area as a holiday destination began to increase.

The suburb of Broadbeach has two shopping centres in close proximity and numerous shops and restaurants.

Pacific Fair, the second largest shopping centre on the Gold Coast is located on Hooker Boulevard in Broadbeach Waters, not far from the intersection on the Gold Coast Highway. Pacific Fair has over 300 specialty stores and four anchor stores. In January 2014 work began on re-developing and re-branding the shopping centre. $670 million is being spent on expanding the centre to cater for a 120 new specialty stores, making the centre the largest in Queensland and fourth largest in the nation. 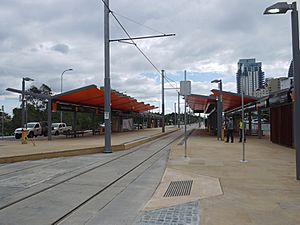 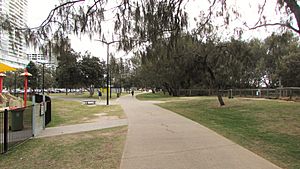 Broadbeach has two main arterial roads connecting the suburb with other parts of the Gold Coast. Gold Coast Highway runs the full length of the coast and connects all coastal suburbs with Broadbeach. Hooker Boulevard, which turns into Nerang-Broadbeach Road after a roundabout in Carrara connects the suburb with Pacific Motorway which passes through Nerang as well as Nerang railway station.

Broadbeach is serviced by Translink services, a subsidiary of the Department of Transport and Main Roads who operate an integrated ticking system throughout South East Queensland. The recently opened G:link operates two stations in the suburb which connects Broadbeach with the hubs of Surfers Paradise and Southport. These are Broadbeach South Station and Broadbeach North Station. Broadbeach South bus station is the main bus station in Broadbeach, which have regular and high-frequency buses that travel to Gold Coast Airport,Nerang railway station, Tweed Heads and Robina.

A 1.3 km monorail connects the Oasis Shopping Centre with Conrad Jupiters Casino. The monorail operates from 10:00am till 6:00pm sevens days a week. The system recently re-opened in December 2014 after almost two years out of service due to maintenance issues.

The Gold Coast Oceanway provides pedestrians and cyclists access along the beaches of Broadbeach.

In the 2016 census, Broadbeach recorded a population of 5,514 people, The median age of the Broadbeach population was 41 years, higher than the national median of 38. 51.0% of people were born in Australia. The next most common countries of birth were New Zealand 7.0% and England 4.7%. 66.8% of people spoke only English at home. The most common responses for religion were No Religion 31.0% and Catholic 20.3%.

All content from Kiddle encyclopedia articles (including the article images and facts) can be freely used under Attribution-ShareAlike license, unless stated otherwise. Cite this article:
Broadbeach, Queensland Facts for Kids. Kiddle Encyclopedia.