The Star Gold Coast (formerly Jupiters Hotel and Casino) is a casino and hotel located in the suburb of Broadbeach on the Gold Coast in Queensland, Australia. The casino, which was Queensland's first, is situated next to the Nerang River and is operated by Star Entertainment Group. It opened in November 1985 as Conrad Jupiters. In 2017 it was rebranded as The Star, Gold Coast.

One per cent of the casino's gross gaming revenue is deposited in the Gambling Community Benefit Fund. This fund was established in 1987, supports non-profit community-based groups and is administered by the Government of Queensland. 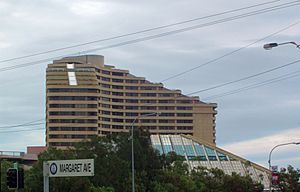 Jupiters Theatre underwent a $20 million makeover and expansion and re-opened in June, 2012. The redevelopment of the theatre resulted in the capacity more than doubling to accommodate 2,000 seated or 2,300 general admission guests and the theatre viewing experience will be improved through state-of-the-art technologies and architecture.

The theatre redevelopment includes the creation of a balcony level with up to 300 seats, VIP Hospitality rooms for pre- and post-event functions, new bars on the balcony and orchestra level, new toilets on the balcony and orchestra level, purpose built integrated movie projection booth, multi-purpose mechanical thrust stage, the enhancement of disability access to all areas, and increased dressing room space.

All content from Kiddle encyclopedia articles (including the article images and facts) can be freely used under Attribution-ShareAlike license, unless stated otherwise. Cite this article:
The Star Gold Coast Facts for Kids. Kiddle Encyclopedia.