Bundall is a suburb of the City of Gold Coast in Queensland, Australia. At the 2011 Census, Bundall had a population of 4,188.

The name Bundall is from the Aboriginal word for a species of prickly vine. The locality was originally established by British landowner Edmund Henry Price in 1862. The northern boundary of the area runs from the southern Nerang Riverbank to The Arts Centre Gold Coast. It then continues south, bordering the present day Village High Road, alongside Benowa. The locality of Sorrento is within the southern section of the suburb of Bundall.

A cultural precinct may be built on the Evandale site that currently incorporates the Gold Coast Arts Centre. The project may begin at the beginning of 2014. The City of Gold Coast's vision is that when completed, the Gold Coast Cultural Precinct will include drama, music, dance, art, new media and public sculpture. 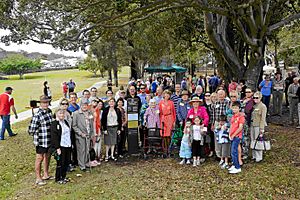 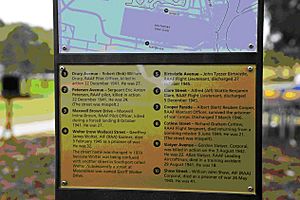 The Slatyer entries on the Southport Park Streets Heritage Sign

The median age of the Bundall population was 42 years, 5 years above the national median of 37.

All content from Kiddle encyclopedia articles (including the article images and facts) can be freely used under Attribution-ShareAlike license, unless stated otherwise. Cite this article:
Bundall, Queensland Facts for Kids. Kiddle Encyclopedia.