Nicholas Riewoldt ( REE-volt; born 17 October 1982) is a former Australian rules footballer who played for the St Kilda Football Club in the Australian Football League (AFL). He was the first draft selection in the 2000 AFL draft. He was the captain of St Kilda in 2005 and from 2007 to 2016. Riewoldt holds the all-time record for most marks in VFL/AFL history, surpassing Gary Dempsey in Round 15, 2017.

Born in Hobart, Tasmania, Riewoldt and his family moved to the Gold Coast, Queensland, when he was 9 years old. He attended Robina State Primary School from Grade 5 and became the school's vice captain and UNICEF representative. He later switched to All Saints Anglican School during his high school years. Australian rules football was not offered in many Queensland schools at the time but he made a name for himself as an overall sportsman, participating in the school's athletics, cross country, cricket, soccer and touch football teams at a high level. Academically, he also excelled in the studies of physics and chemistry.

Riewoldt played his junior and early senior football for the Broadbeach Cats before moving to the Southport Sharks where he was identified as an outstanding junior talent. He played a big part in Southport's historic fourth consecutive QAFL premiership in 2000. After being kept virtually touchless for the first half, he was moved into the ruck and kicked two important goals in the 11-point grand final victory.

Growing up, Riewoldt supported the Hawthorn Football Club. He is the first cousin of Richmond footballer Jack Riewoldt, who also plays as a forward.

His breakout season was 2004 when he took an AFL record 256 marks and also finished in the top ten for both the Coleman and Brownlow medals. He received the AFL Players Association Most Valuable Player Award, the Leigh Matthews Trophy and was selected in the 2004 All-Australian Team for the first time.

Riewoldt was rewarded for his 2004 efforts when St Kilda named him club captain for 2005 as part of their rotating captaincy policy. His 2005 season began badly as he broke his collarbone in the third quarter of the first game of the season against the Brisbane Lions. This drew controversy as he was then bumped after the injury by Lions players Chris Scott and Mal Michael. The pair were not asked to face the AFL tribunal on charges of misconduct for targeting an injured player as it was ruled that they would not have known that Riewoldt was injured, that Riewoldt had waved away a trainer that was attending to the injury and that the bumps did not contribute to the injury.

Early in the 2006 season, Riewoldt returned close to his best form, kicking five goals against former powerhouse Brisbane in Round 3. This match seemed to have put Riewoldt's kicking "yips" to bed, but they returned during the Round 7 match against Geelong when he missed a simple but critical goal from 15 metres out. This miss was forgotten the next week when Riewoldt kicked 9 goals against Carlton and took many contested marks. Riewoldt also took a match saving mark for the Saints against Sydney in Round 11, a match the Saints won in wet conditions, and one that kept their finals hopes alive.

Riewoldt topped off the 2006 season by winning his third Trevor Barker Award. In achieving this feat, Riewoldt has already emulated some of the Saints greatest players such as the 1966 premiership captain Darrel Baldock, former skipper Nathan Burke and past champions Wells Eicke, Jack Davis and Jim Ross. Riewoldt was recognised for his season with selection in the 2006 All-Australian Team as a forward player, his second career All-Australian Team award. 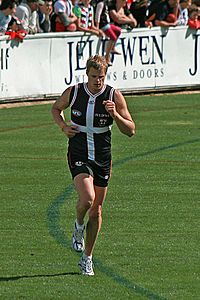 Riewoldt at training prior to the 2009 AFL Grand Final

At the beginning of the 2007 season, Lyon appointed Riewoldt Co-Captain of the St Kilda Football Club, along with Luke Ball and Lenny Hayes, both former captains themselves. Back and hamstring injuries forced Riewoldt to miss the first three matches of the season. Riewoldt started the season well, with eight goals in his first two matches. In Round 7, Riewoldt dominated against the Sydney Swans, which kick started another outstanding year. Despite the Saints missing the finals, Riewoldt enjoyed a better year statistically than 2004, narrowly winning St Kilda's best and fairest Trevor Barker Award ahead of defender Sam Fisher.

Riewoldt played in St Kilda's 2008 NAB Cup winning side – the club's third pre-season cup win. Riewoldt had a consistent 2008 season, coming second in the AFL for marks (behind Matthew Richardson) and kicking 57 home and away season goals (63 all up) to finish ninth in the competition. This performance earned him his third All-Australian selection, his first at centre-half-forward. He was also selected to play in the Hall of Fame Tribute Match, but was ultimately unable to play due to a knee injury. Riewoldt was recognised for his season with selection in the 2008 All-Australian Team as a forward player. This was his third All-Australian Team award.

Early in the season Riewoldt became a target for the fledgling Gold Coast Football Club, which was awarded the 17th licence to enter the AFL in 2011. However, he knocked back their offer to remain at St Kilda.

Riewoldt took the most marks of any player in the league, averaging 9.7 a game and kicking 65 goals in the home and away season, averaging 3.3 a game.

He was a significant player in a St Kilda team which went through the home and away season with 20 wins and 2 defeats.

Riewoldt played in 21 of 22 matches in the 2009 home and away rounds in which St Kilda qualified in first position for the finals series, winning the club's third minor premiership.

In the preliminary final against the Western Bulldogs, Riewoldt kicked four goals, one of which was in the final minutes..

St Kilda qualified for the 2009 AFL Grand Final after qualification and preliminary finals wins but were defeated by Geelong by 12 points. Riewoldt kicked one goal.

During St Kilda's 28-point Round 3 win over Collingwood, on 9 April 2010, Riewoldt experienced a high grade hamstring tear. He underwent surgery and made his return in Round 15, playing 15 games in the season for 39 goals.

On 1 September 2016, at the Saints' best-and-fairest awards night, Riewoldt announced that he would stand down as St Kilda captain.

On 31 July 2017, Riewoldt announced that he would retire at the end of the season. He played the final game of his career in round 23 when he had 15 disposals, 8 marks and 1 goal in a loss to the Richmond Tigers, his cousin's team.

Riewoldt is married to Catherine Heard. The pair married in October 2012 at her parents' property in Waco, Texas, United States. They have three sons, James (born in 2014), William (born in 2016), and Edward "Teddy" (born 2019). His sister Madeleine died of aplastic anaemia, a rare bone marrow condition, in February 2015 at the age of 26. Riewoldt and his family established Maddie's Riewoldt's Vision to raise funds for research into new treatments for blood cancers. Once a year during the AFL season when the St Kilda Saints (Nick Riewoldt's team) and the Richmond Tigers (his cousin Jack Riewoldt's) are scheduled to play against each other it has become known as "Maddie's game" and acts as a fundraiser for aplastic anaemia.

All content from Kiddle encyclopedia articles (including the article images and facts) can be freely used under Attribution-ShareAlike license, unless stated otherwise. Cite this article:
Nick Riewoldt Facts for Kids. Kiddle Encyclopedia.