Currumbin Valley is a rural locality in the City of Gold Coast, Queensland, Australia. It borders New South Wales. In the 2016 census, Currumbin Valley had a population of 1,849 people. 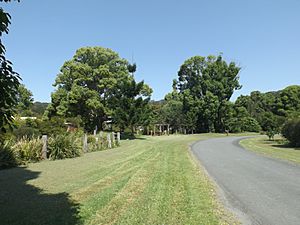 The valley is relatively small in size being approximately twenty-four kilometers long and around four kilometers wide. Furthermore, Currumbin Valley provides both rural and residential land but is predominantly rural. Currumbin Valley is a unique part of Australia’s Green Cauldron, being the first valley to the north of the escarpment of the cauldron (the temple of which is Mount Warning) in the Murwillumbah region, to the south.

The main road through Currumbin Valley – Currumbin Creek Road extends 20 kilometres west to the Mt Cougal Section of the Springbrook National Park, where it terminates, with a World-Heritage-Listed rainforest walk, the Cougal Cascades (waterfalls) and abundant, native flora and fauna. This pristine rainforest is part of the eastern section of the Gondwana Rainforest's of Australia.

The Currumbin Valley was predominantly used for timber getting and grazing – the settlement date of this area dates from the 1840s. In the 1870s and 1880s many banana plantations, sugar crops and dairy farms were established. This therefore enabled the minimal population to grow. Again some growth took place during the early 1900s, following the construction of the railway line. Significant development occurred from the 1970s. However, significant growth took place during the 1990s, a result of new dwellings being added to the area. Growth slowed between 2001 and 2011 as fewer new dwellings were added.

The Currumbin Valley Rock Pool are located 12 km inland from Currumbin beach. The natural rock pools attract many people and are a fantastic place for family to come and visit. Springbrook also offers a number of walking trails around the beautiful rainforest. Information about the walking trails around the Springbrook National Park can be found at the Rangers offices in Natural Bridge or Springbrook. Nicoll Scrub National Park is a protected area in Queensland, 88 km southeast of Brisbane. It adjoins the Currumbin Valley Reserve and protects remnant rainforest vegetation.

All content from Kiddle encyclopedia articles (including the article images and facts) can be freely used under Attribution-ShareAlike license, unless stated otherwise. Cite this article:
Currumbin Valley, Queensland Facts for Kids. Kiddle Encyclopedia.