Burleigh Head is a small national park at Burleigh Heads in the City of Gold Coast in South East Queensland, Australia.

The park is 90 kilometres (56 mi) south of Brisbane. The park is tiny yet it contains a diverse range of habitats. Tallebudgera Creek enters the ocean directly south of the park. No camping is permitted in the park. Access is via the Gold Coast Highway which passes by the park. An information centre is available.

Burleigh Head National Park is a popular place for hiking, walkers and joggers because it located in a cool climate and provides great views. There are two walking tracks in the national park, one climbing the hill to the summit which is about 88 m above sea level, called the Rainforest circuit and another leading around the headland just above sea level called the Ocean view circuit. Watching migrating whales from within the park is another popular activity. 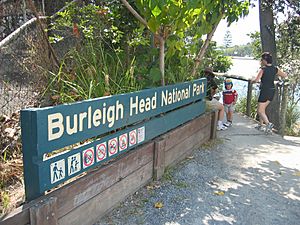 The headland has steep sides and is 80 m in height. The formation of the Burleigh headland began between 23 and 25 million years ago. At this time the Tweed Volcano was active. Molten basalt lava from the volcano flowed all the way down the valleys and eroded them all. The valleys were covered in hardened sedimentary rocks before reaching what is now the Burleigh headland. Along Tallebudgera Creek there are rocky platforms and sandy beaches. On the seaside part of the park are black boulders at the base of a cliff. Upstream tidal Tallebudgera Creek has a mangrove environment.

The headland is an important cultural site for the local Aboriginal tribe known as the Minjungbal people.

The park preserves remnant areas of rainforest and mangrove forests. Western parts are dominated by dry eucalypt forest containing species such as brush box, forest red gum and grey ironbark. On the seaward facing slopes are Swamp she-oak, native hibiscus tree and Pandanus palms. There are also areas of heathland and tussock grassland.

The park contains a popular walking track, known as the Oceanview Track, which connects Burleigh Heads and Tallebudgera Creek. In December 2014, the track was closed due to boulders smashing into the path as they cascaded down the slopes. The track was re-opened in mid-2015 after further at-risk boulders and rock fragments were removed.

All content from Kiddle encyclopedia articles (including the article images and facts) can be freely used under Attribution-ShareAlike license, unless stated otherwise. Cite this article:
Burleigh Head National Park Facts for Kids. Kiddle Encyclopedia.