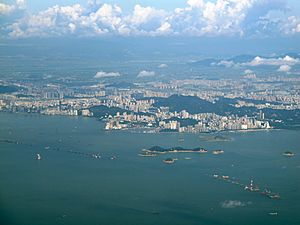 Looking down the city of Zhuhai

Zhuhai ( Chinese: 珠海; pinyin: Zhūhǎi) is a city in Guangdong, China. It is in the Pearl River Delta. It borders Jiangmen to the northwest, Zhongshan to the north, and Macau to the south. Zhuhai was one of the original Special Economic Zones established in the 1980s. Zhuhai is one of China's popular tourist destinations, being called the Chinese Riviera. Most people in the city are migrants who speak Mandarin. Its northern part, Xiangzhou district is now part of the Guangzhou-Shenzhen built-up area, the biggest built-up area in the world. The area had more than 44,478,513 people in 2010. It includes Shenzhen, Dongguan, Foshan, Zhongshan, Macao, the main part of Guangzhou, and small parts of Jiangmen and Huizhou. 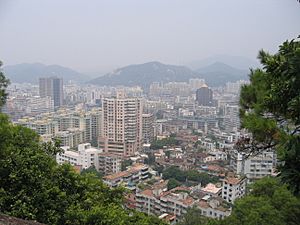 All content from Kiddle encyclopedia articles (including the article images and facts) can be freely used under Attribution-ShareAlike license, unless stated otherwise. Cite this article:
Zhuhai Facts for Kids. Kiddle Encyclopedia.