Transport on the Gold Coast, Queensland facts for kids 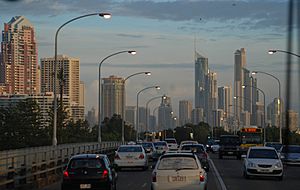 The Gold Coast is the largest non-capital city and fastest growing city in Australia. As a result, the Gold Coast has a wide range of public and private transport options from cars and bikes to buses, rail, light rail and monorail. The car is the dominant mode of transport for Gold Coast but with the increasing population that leads to more traffic congestion. This has led to the Queensland Government and Gold Coast City Council placing more effort into providing public transport including a new ferry service and a light rail system.

The Gold Coast has extensive paths one of which is called the Gold Coast Oceanway which is a 36 kilometres (22 mi) network of pathways along the coastline. Locals residents and visitors alike often walk to the beach, shops or anywhere nearby, particularly so in areas of high-density living.

The Gold Coast hinterland also embraces the World Heritage listed Lamington National Park, established in 1915, with over 160 kilometres (99 mi) of graded walking tracks maintained by the Queensland National Parks and Wildlife Service. The development of the national park tracks and accommodation at Binna Burra owe a great deal to the work of Romeo Lahey and Arthur Groom in the 1920s and 1930s.

Active travel is the brand for Gold Coast behaviour change programs for encouraging sustainable transport. Enjoy the way you move is the tag line that rewards those already walking and cycling and encourages reflection on behaviour change for anyone who doesn't enjoy traffic jams.

The car is the dominant mode of transport for Gold Coast residents. The Pacific Motorway (M1) is a motorway connecting the Gold Coast with Brisbane. The Gold Coast Highway runs close to the coast for most of its route and through the centres of Southport, Surfers Paradise, Burleigh Heads and Currumbin. Smith Street Motorway is a 5.7 km route connecting Southport with the Pacific Mortorway. There are numerous other main arterial roads connecting major suburbs throughout the city. 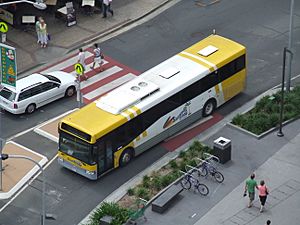 The local bus operator is Surfside Buslines, which provides services covering the majority of the city. 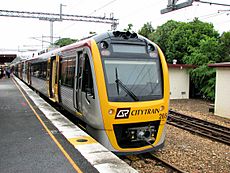 Trains once travelled the South Coast line from Beenleigh to Southport but the increasing popularity of the motor car forced the closure of the line in 1964, which was subsequently resumed for development. The new Gold Coast railway line was constructed further inland in the mid-1990s and runs roughly parallel to the Pacific Motorway alignment, terminating at Varsity Lakes. Queensland Rail City network services connect the Gold Coast with Brisbane, running express between Beenleigh and South Bank stations, with most services continuing onto Brisbane Airport. Much of the line was built as single track. It has gradually been duplicated with the last section scheduled to open in 2017. 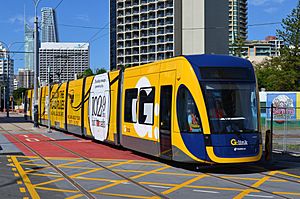 The Gold Coast is one of the fastest growing cities in Australia with travel demands exceeding population growth. In order to tackle congestion effectively, there is a need to squeeze much more capacity from existing corridors. The G:link is a 13 km light rail system, opened in July 2014, operating from Broadbeach South to the Gold Coast University Hospital. The G:Link provides the suburbs of Broadbeach, Surfers Paradise and Southport with a modern and high frequency transport system. The light rail operates at a high frequency with services every 8 minutes in peak times and 15 minutes in off-peak during weekdays and every 10 minutes on the weekends. The system is expected to encourage visitors and residents to use public transport to reduce major traffic congestion and pollution problems. An extension, from the current terminus at Gold Coast University Hospital to Helensvale railway station, was announced in October 2015. The extension is scheduled to open before the 2018 Commonwealth Games.

A 1.3-kilometre (4,300 ft) route operates between Oasis Shopping Centre and Jupiters Hotel and Casino in Broadbeach on a Von Roll Type III system with three stations. The monorail operates from 10:00am till 6:00pm sevens days a week. The system reopened in December 2014 after almost two years out of service due to maintenance issues.

There is also a monorail system at Sea World.

All content from Kiddle encyclopedia articles (including the article images and facts) can be freely used under Attribution-ShareAlike license, unless stated otherwise. Cite this article:
Transport on the Gold Coast, Queensland Facts for Kids. Kiddle Encyclopedia.