Currumbin ( kə-RUM-bən) is a coastal suburb in the City of Gold Coast, Queensland, Australia. In the 2016 census, Currumbin had a population of 2,920 people.

Samuel William Grey was the first European to acquire land in the area. In 1904, Isle, Love and Co advertised the first subdivisions in Currumbin The first hotel was built by Wallace McDonald Nicoll in 1910 on Duringan Street overlooking the mouth of the Currumbin Creek. During this period tourism and industry significantly increased in the beach side and valley areas of Currumbin. Many of the houses at Currumbin date from the period of later subdivisions in the 1920s. The area also contains a number of fibro beach houses. Since then later development has occurred including some high rise backing onto the hillside at Pacific Parade. 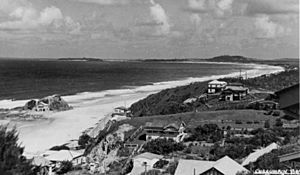 Generally the area contains more natural vegetation than other areas of the coast due in part to the difficulty of building on the steep hillsides and in part to the presence of the Currumbin Wildlife Sanctuary - a long-standing icon and landmark at the Gold Coast. The Sanctuary comprises a substantial area of land on both sides of the highway adjacent to Flat Rock Creek.

In 2013, Currumbin was named Australia's cleanest beach. At an award ceremony at Coogee Beach WA the national organisation Keep Australia Beautiful crowned Currumbin with the prestigious title. Currumbin was commended in particular for its excellence in community involvement and partnerships. 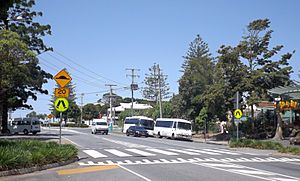 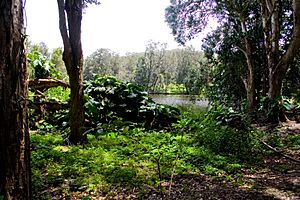 Currumbin has a number of heritage-listed sites, including:

The Currumbin area is one of a particular character. Stretching from Currumbin Creek in the north to Wyberba Street in the south the area is easily identified because of its headlands that project into the beach. The Pacific Highway skirts to the rear of Currumbin creating something of a quaint backwater. Even the more usual commercial development of the Gold Coast Highway is absent as the highway winds over the headland and past the Currumbin Wildlife Sanctuary.

At the beach front, Elephant Rock and Currumbin Rock enclose a discrete surf beach. Currumbin Alley is a popular surfing site formed on the bar of Currumbin Creek, particularly for longboards. Some properties to the south are only separated from the beach by an undeveloped public road reserve and the elevated land provides opportunities for views unusual at the coast.

The Currumbin Valley Reserve is located west of Currumbin. Of late, developments in the area have started to destroy the natural rainforests and wildlife. 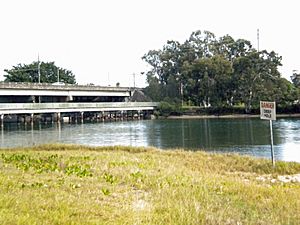 The Gold Coast Oceanway follows a beachfront alignment around Currumbin Alley and along Currumbin Beach. Between Tomewin Street and Flat Rock the current Oceanway pavements swing inland along Temmangum Street.

Each year during September, the Swell Sculpture Festival is held along the Oceanway at Currumbin between Currumbin Creek and Elephant Rock. Elephant rock becomes a pedestal for a signature artwork. Other artwork is spread out along the Oceanway pavements and upon the beach and dune areas. Artwork from the festival often finds its way onto display on public and private spaces across the Gold Coast region including a horse in the park at Broadbeach, Fish along the foreshore at Harley Park, Pelicans along the bank of Currumbin Creek, a seal mother and pup along the Oceanway at Miami, a ship up on Point Danger and a metal goddess within a subdivision at Reedy Creek.

Nearby the Currumbin In The Bin short film festival usually coincides with the Swell Sculpture festival held in the carpark opposite the Currumbin Wildlife Sanctuary.

All content from Kiddle encyclopedia articles (including the article images and facts) can be freely used under Attribution-ShareAlike license, unless stated otherwise. Cite this article:
Currumbin, Queensland Facts for Kids. Kiddle Encyclopedia.