Fire ants are stinging ants. They are also called ginger ants and tropical fire ants. They evolved in South America, but have become a major pest in North America. They are known for a painful sting. This sting uses a base not an acid. 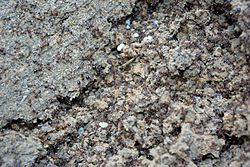 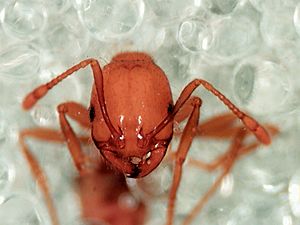 Detail of the head (Solenopsis geminata)

The bodies of mature fire ants, like the bodies of all typical mature insects, are divided into three sections: the head, the thorax, and the abdomen, with three pairs of legs and a pair of antennae. Fire ants of those species invasive in the United States can be distinguished from other ants locally present, by their copper brown head and body with a darker abdomen. The worker ants are blackish to reddish, and their size varies from 2 to 6 mm (0.079 to 0.236 in). In an established nest these different sizes of ants all are present at the same time.

Solenopsis spp. ants can be identified by three body features—a pedicel with two nodes, an unarmed propodeum, and antennae with 10 segments plus a two-segmented club. Many ants bite, and formicine ants can cause irritation by spraying formic acid; myrmecine ants like fire ants have a dedicated venom-injecting sting, which injects an alkaloid venom, as well as mandibles for biting. 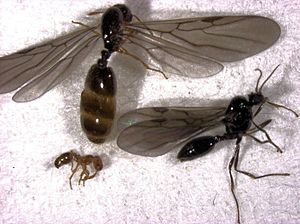 A typical fire ant colony produces large mounds in open areas, and feeds mostly on young plants and seeds. Fire ants often attack small animals and can kill them. Unlike many other ants, which bite and then spray acid on the wound, fire ants bite only to get a grip and then sting (from the abdomen) and inject a toxic alkaloid venom called solenopsin, a compound from the class of piperidines. For humans, this is a painful sting, a sensation similar to what one feels when burned by fire (hence the name) and the after effects of the sting can be deadly to sensitive people. Fire ants are more aggressive than most native species and so have pushed many species away from their local habitat. One such species that Solenopsis ants parasitically take advantage of are bees, such as Euglossa imperialis, a non-social orchid bee species, from which the ants would enter the cells from below the nest and rob the cell's contents. These ants are renowned for their ability to survive extreme conditions. They do not hibernate, but can survive cold conditions, although this is costly to fire ant populations as observed during several winters in Tennessee, where 80 to 90% of colonies died due to several consecutive days of extremely low temperatures.

Fire ants nest in the soil, often near moist areas, such as river banks, pond shores, watered lawns, and highway shoulders. Usually, the nest will not be visible, as it will be built under objects such as timber, logs, rocks, or bricks. If there is no cover for nesting, dome-shaped mounds will be constructed, but these are usually only found in open spaces, such as fields, parks and lawns. These mounds can reach heights of 40 cm (16 in), but can be even higher on heavier soils, standing at 1.0m in height and 1.5m in diameter. Colonies are founded by small groups of queens or single queens. Even if only one queen survives, within a month or so, the colony can expand to thousands of individuals. Some colonies may be polygynous (having multiple queens per nest).

Fire ants are resilient and can survive floods. During Hurricane Harvey in Texas, clumps of fire ants were seen clumped together on the surface of the water. Each clump had as many as 100,000 individual ants, who formed the temporary structure until finding a new permanent home. 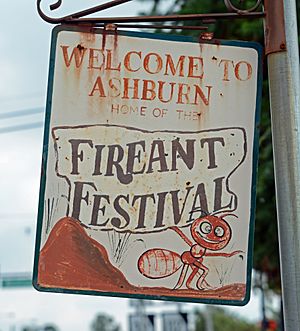 Sign for the Fire Ant Festival in Ashburn, Georgia

In 1918, fire ants were accidentally moved into the United States of America by a ship from South America. They were moved in large amounts of dirt. The ships brought heavy things like machines from the US to South America. They brought back light things like crops. The dirt was used to make the ships weigh more. The dirt sometimes had fire ants in it. In the United States, fire ants have no natural predators or competitors. Native animals are not adapted to these ants. Fire ants are very aggressive. Their colonies can have many queens unlike many other ant species. Because of this, fire ants have spread very fast. By 1965, fire ant mounds came up on the south eastern coast and as far west as Texas. Today they are found in at least 10 southern states. There is a separate group of fire ants living in California.

Fire ants have done a lot of harm as they have spread across the United States. Because they are attracted to electrical currents, they chew through wires. This makes shorts in electrical circuits. Fire ants have also disturbed the natural balance of native ecosystems. In some places, they have killed off 70% of the native ant species and 40% of other native insect species.

Each year, about 25,000 people go for medical help because of painful bites from fire ants. Fire ants attack in groups when disturbed. People often get many bites. Fire ant bites are usually not dangerous. Some people are allergic to fire ants. They may go into shock. This is called anaphylaxis. This can kill them.

The fire ants are growing in the US 80 years after they came there. About 157 chemicals, like ammonia, gasoline, parts of manure, and insect-killing pesticides, are used against fire ants. However, none of them were very helpful. By 1995, the government had allowed only one fire-ant bait for people to use a lot. 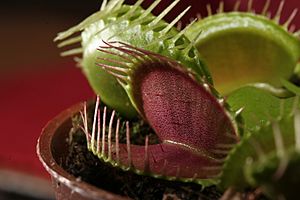 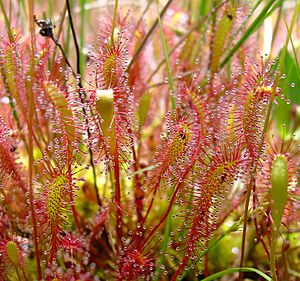 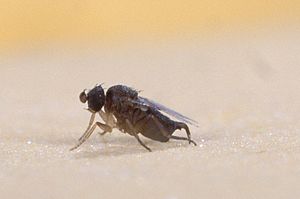 Phorid flies, or Phoridae, are a large family of small, hump-backed flies somewhat smaller than vinegar flies; two species in this family (Pseudacteon tricuspis and Pseudacteon curvatus) are parasitoids of the red imported fire ant in its native range in South America. Some 110 species of the genus Pseudacteon, or ant-decapitating flies, have been described. Members of Pseudacteon reproduce by laying eggs in the thorax of the ant. The first instar larvae migrates to the head, then develops by feeding on the hemolymph, muscle tissue, and nervous tissue. After about two weeks, they cause the ant's head to fall off by releasing an enzyme that dissolves the membrane attaching the ant's head to its body. The fly pupates in the detached head capsule, emerging two weeks later.

Pseudacteon flies appear to be important ecological constraints on Solenopsis species and they have been introduced throughout the southern United States, starting with Travis, Brazos, and Dallas counties in Texas, as well as south central Alabama, where the ants first entered North America.

The Venus flytrap, a carnivorous plant, is native only to North and South Carolina in the United States. About 33% of the prey of the Venus flytrap are ants of various species. They lure their prey with a sweet sap. Once the prey has entered the trap and within about 3 seconds has touched two or three "trigger hairs", bristles on the surface of the trap, the leaf closes around the prey, confining it behind the "teeth" on its perimeter, and digests it. The majority of ants that are captured include non-native RIFAs, and three other species of ants. Other carnivorous plants, such as sundews (Drosera) and various kinds of pitcher plants also trap many ants.

All content from Kiddle encyclopedia articles (including the article images and facts) can be freely used under Attribution-ShareAlike license, unless stated otherwise. Cite this article:
Fire ant Facts for Kids. Kiddle Encyclopedia.