Anaphylaxis is a serious allergic reaction. It begins suddenly and may cause death. Anaphylaxis has many symptoms, such as an itchy rash, throat swelling, breathing problems, and low blood pressure. Common causes include insect bites, foods, and medications.

Anaphylaxis happens when a person eats, breathes in, or is injected with an allergen (something they are allergic to). Their immune system over-reacts. It sends out special proteins from inside certain white blood cells. These proteins can start an allergic reaction or make the reaction worse.

Anaphylaxis is diagnosed from a person’s signs and symptoms. The best treatment is an injection (a shot) of epinephrine (adrenaline). Sometimes doctors give other medicines along with epinephrine.

Allergy testing may help to identify what caused a person’s anaphylaxis. Skin allergy tests (such as patch tests) can be done for certain foods and venom's. Blood tests can diagnose milk, egg, peanut, tree nut and fish allergies.

Worldwide, about 0.05–2% of people have anaphylaxis at some point in their lives. Anaphylaxis appears to be getting more common.

Cases of anaphylaxis have been reported since ancient times.

The condition was originally named "aphylaxis" by Charles Richet in 1902. The word "anaphylaxis" comes from the Greek words ἀνά (ana), against, and φύλαξις (phyla's), protection.

In 1913, Richet was awarded the Nobel Prize in Medicine and Physiology for his work on anaphylaxis. 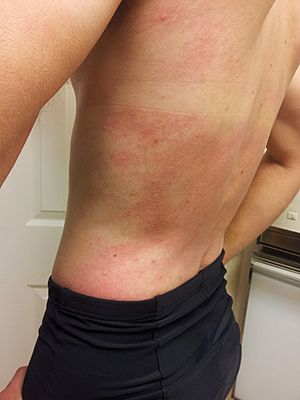 The most common body systems affected by anaphylaxis include:

People with anaphylaxis usually have problems with two or more of these body systems. 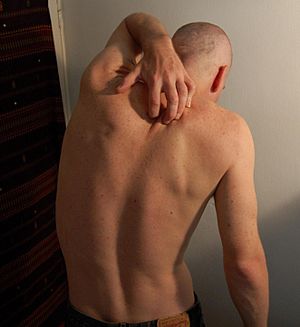 Itching is a symptom

In 20% of cases, the tongue or throat may swell up, which can cause breathing problems. If a person is having breathing problems, the skin may turn blue because the body is not getting enough oxygen. This is called cyanosis.

Respiratory signs and symptoms include: 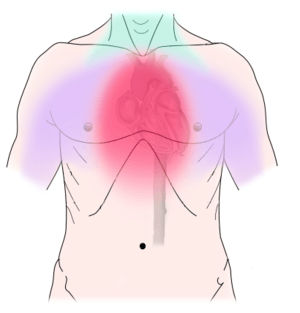 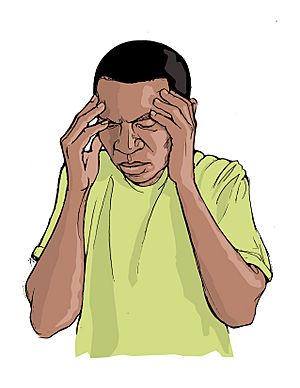 Anaphylaxis can also cause low blood pressure. This may be caused by a condition where the blood vessels get much wider because of the chemicals released by the immune system. It can also be caused by cardiogenic shock, where the heart is not getting enough blood to pump out to the rest of the body.

Gastrointestinal symptoms may include crampy abdominal pain, diarrhea, and vomiting. There may be confusion, a loss of bladder control or pelvic pain similar to that of uterine cramps. Dilation of blood vessels around the brain may cause headaches. A feeling of anxiety or of "impending doom" has also been described.

Anaphylaxis is a medical emergency that may require emergency medical treatment. Some patients need help keeping their airways open so they can breathe in air. Other patients need to be given extra oxygen or large amounts of intravenous fluids (fluids given through a needle into a vein). 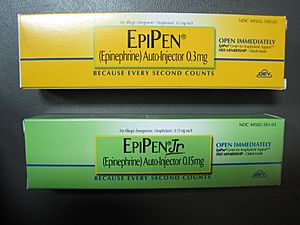 Epinephrine is the best treatment for anaphylaxis. Doctors often give antihistamines (which destroy histamine) and steroids along with epinephrine. Once a person has returned to normal, they should be watched in the hospital for 2 to 24 hours to make sure their symptoms do not return.

Epinephrine is the best and first treatment used for anaphylaxis. It reverses many of the symptoms of anaphylaxis. For example, it makes the bronchi (the passages to the lungs) get wider; it makes the blood vessels go back to their normal size; and it raises blood pressure.

Epinephrine comes in an "auto-injector," usually called an "EpiPen." Once its safety cap is taken off, the EpiPen just has to be pressed into the thigh, and the right amount of epinephrine will automatically be injected into the person's body. Doctors can prescribe EpiPens to people who know they have allergies, so they can treat themselves for anaphylaxis. 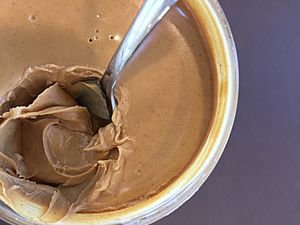 Many people have allergies to nuts

If anaphylaxis is diagnosed and the person is treated quickly, there is a good chance that they will recover. Even if nobody knows what caused the anaphylaxis, the person usually makes a good recovery as long as they get medication to stop the reaction.

All content from Kiddle encyclopedia articles (including the article images and facts) can be freely used under Attribution-ShareAlike license, unless stated otherwise. Cite this article:
Anaphylaxis Facts for Kids. Kiddle Encyclopedia.