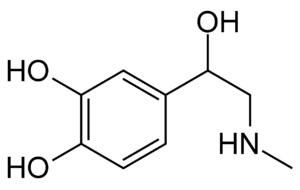 Epinephrine, also known as adrenaline, is a hormone and a medication. The names "adrenaline" and "epinephrine" come from the Latin words ad-+renes and the Greek words epi-+nephros. Both mean "into or onto the kidney" (adrenaline is made in the adrenal glands, which sit on top of the kidneys). In medical jargon, epinephrine is shortened to just "epi" (pronounced eh-pee).

The hormone was first isolated and purified in 1901 by Japanese chemist Jokichi Takamine. It was patented in the United States with the name "adrenaline."

Effects in the body

Epinephrine is used to treat a few different medical problems.

Epinephrine can restart a person's heart when they are in cardiac arrest (their heart has stopped beating). It can make the heart start pumping blood to the rest of the body again.

People with allergies can get a doctor's prescription for an epinephrine "auto-injector." Anyone can learn to use an auto-injector. If a person starts having anaphylaxis, they just press the auto-injector to the outside of their thigh, and the device will automatically inject the right dose of epinephrine into the person's thigh.

Epinephrine can be given for asthma attacks, if regular asthma medications like albuterol do not work. The epinephrine will relax the muscles around the lungs and widen the bronchi, making it easier to breathe.

All content from Kiddle encyclopedia articles (including the article images and facts) can be freely used under Attribution-ShareAlike license, unless stated otherwise. Cite this article:
Epinephrine Facts for Kids. Kiddle Encyclopedia.