The adrenal gland is a gland in most mammals. It is near the kidneys. Its name tells its position (ad – "near", and renes – "kidneys"). The gland is made up of two types of tissues: the centrally located tissue is called the adrenal medulla and outside this lies the adrenal cortex.

The adrenal gland makes hormones which control stress. It is involved in the production of steroid hormones. Among these hormones are cortisol and adrenaline. 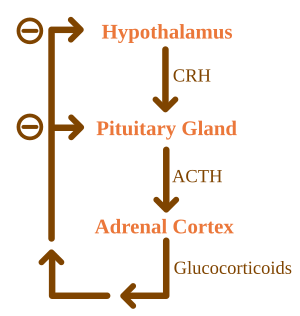 Negative feedback in the HPA axis 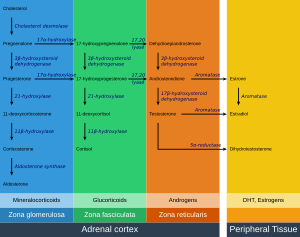 The hormones secreted from the cortex region are called adrenocorticosteroids or corticoids. These are the hormones it makes:

The adrenal medulla, in the center of the gland, makes:

All content from Kiddle encyclopedia articles (including the article images and facts) can be freely used under Attribution-ShareAlike license, unless stated otherwise. Cite this article:
Adrenal gland Facts for Kids. Kiddle Encyclopedia.